Tactical Analysis: Combination Play In and Around The Goal

Combinations in and around the box in central areas will need attacking teams to use quick, short sharp combination play between them in order to create goal scoring opportunities. Opposition teams will look to make central areas congested which can make space difficult to create for players to be able to eliminate opposition defenders as they look to play beyond or between them. Therefore, it’s important that attacking teams create both width and depth to provide support for the player on the ball; behind, beside and beyond. With the attacking team creating width and depth, it will help to drag the defending team out of their shape to enable the attackers to play into the spaces between or behind the opposition defenders. Players that are able to drive with the ball and drag opposition players out of their shape will help attackers to create opportunities to combine and exploit spaces left.

For example, see below the central defenders stepping in with the ball against the defending team to drag players out of their shape to then eventually offload the ball to put the defending team out of balance. An effective way of combining centrally can consist of 1-2s which will play around a defender to eliminate them. Players will need to adjust their body shape throughout if they are in advance of the ball to be able to receive in spaces whilst being aware of what’s around them. In doing this, it will allow players to be ready to play off one or two touches to help them combine with one another. 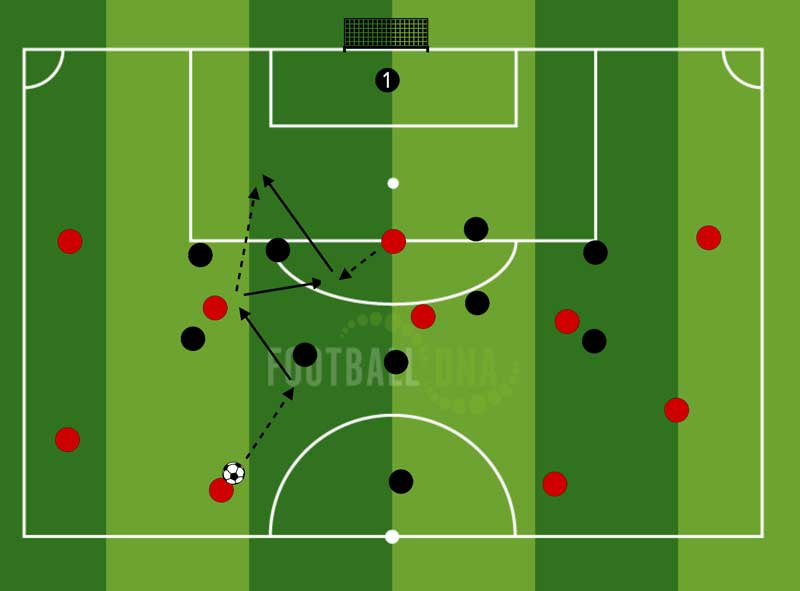 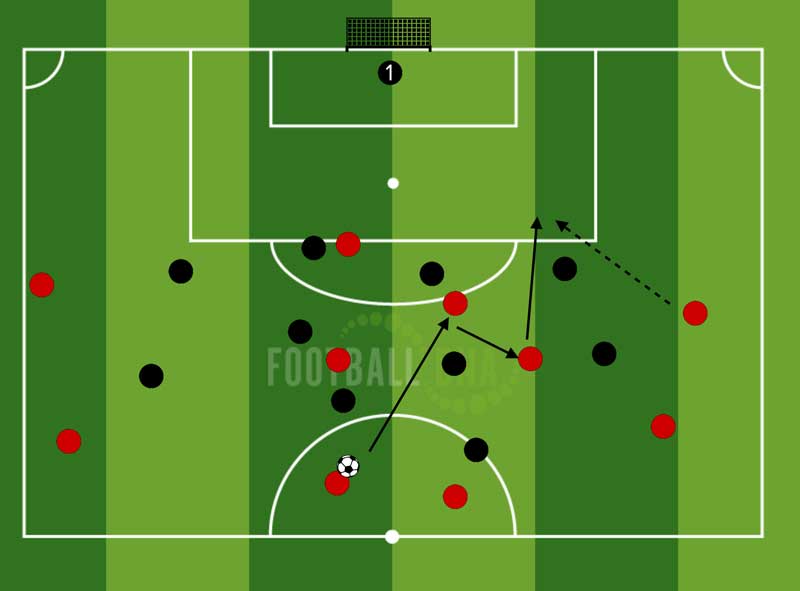 With the central areas being more congested by the defending team being compact centrally; this led onto the attacking team having more success by combining in wide areas. Combinations in wide areas often take place when the attacking team is able to create an overload on one side or when they have been able to drag opponents out of their shape and create space behind or between them. Overlaps, Underlaps, Third man runs and 1-2s are all examples of ways teams can combine and here are some examples of the types of situations that you may need to create for your team in order to make these happen.

An underlap is a way of full backs or other attackers moving into spaces between players in central areas to move beyond the player on the ball. An underlap is a great way to help the attacker offloading the ball to the player that has moved in advance of them, but also to exploit space that the player performing the underlap has created through dragging defenders out of their shape. 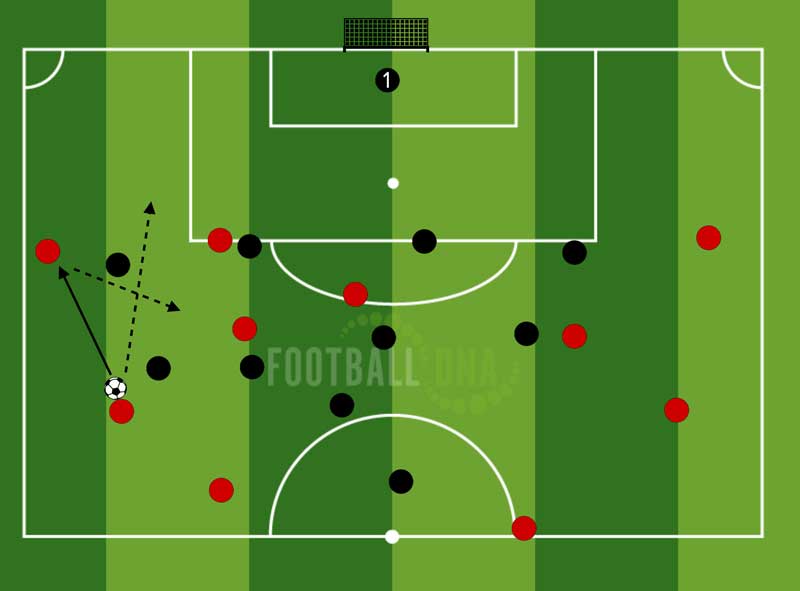 One-Twos in wide areas can be used to play around players to play around defenders. This will typically take place with wide players, full backs, central forwards or the nearest central midfielder. One – Twos are a great way of playing into the space behind when the opposition defender is committed to applying pressure onto an attacking player or the ball. 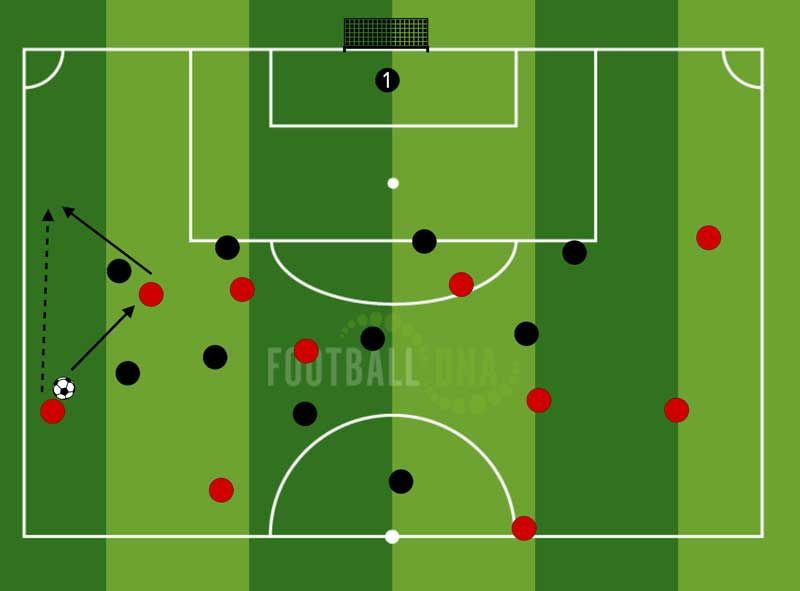 An overlap is another way of attackers to be able to combine in and around the goal. This consists of a player moving around the outside of the player in possession of the ball and running beyond them. Overlaps typically take place between full backs and wide players in order to create an overload (2v1) against an opponents defender. 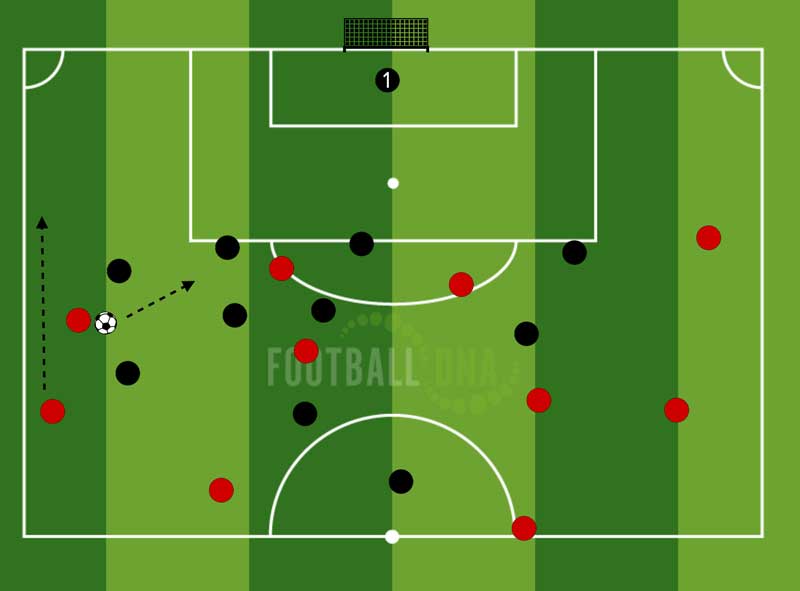 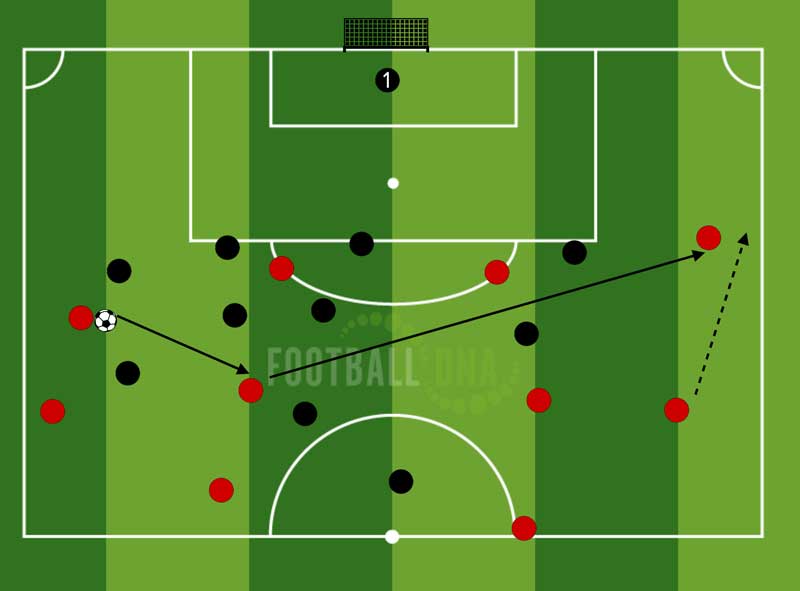 Team Spacing – Encourage the attacking team to create width and depth to help them to create space between and beyond opposition defenders. Width can be created by wide players as well as full backs to enable teams to be able to switch play quickly. Other players such as central midfielders may also create that width to help them to overload one side of the pitch to help them to combine too.

Creating Overloads – Overloads will be key to enable teams to be able to combine in and around the goal successfully. Encourage players without the ball to move to exploit spaces and create overloads as well as encouraging attackers to stay on the ball to create these overloads for themselves too.

Quick Combinations – Pass speed will be important to help players to combine quickly preventing the defenders from being able to react and adjust their position to prevent the opponents from combining. Attackers will need to find ways to play off one or two touches to help them to move the ball quickly to exploit spaces. 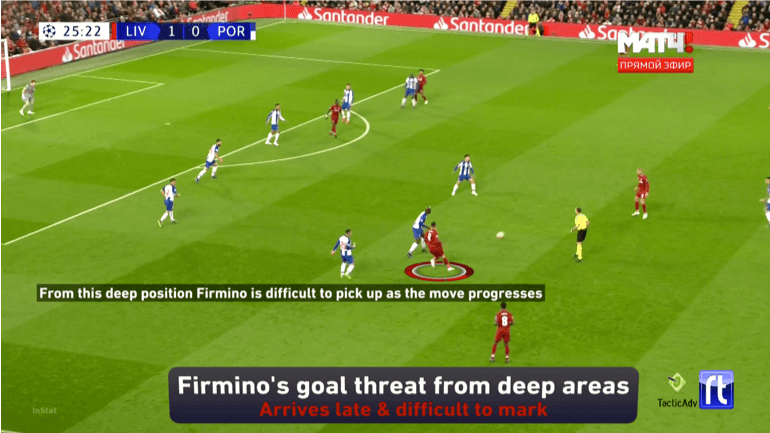