Transition is the process of recognition and response in the first few moments following the regain or loss of possession. Transition is often neglected when coaching players in favour of in/out of possession with coaches often working with the team when they’ve either got the ball or when they are without it.

Why is Transition Important?

If your team is able to respond quickly to a turnover in possession it will allow your team to exploit opportunities to attack (when in possession) as well as reorganise quickly (when out of possession).

How to Use Transition?

When working with your players you will be able to support them through recognition of game situations, decision making /positive thinking, first player actions (including GK), first unit and team actions.

When working with your team whilst they’re in possession, one of the most powerful phrases for me as a player and coach that I received is to “think defend, whilst you’re in attack”, a phrase that has stuck with me throughout my journey. Often, when we are in possession of the ball we solely think about how we are going to score goals as a team. That is the objective. However, if we solely focus on attacking, often we can neglect how our teams deal with the transition once they’ve lost possession of the ball. Therefore, when working with your players it’s important that you get them to start understanding how they will support their team for the ‘what if’. What if we lose possession of the ball? What if I am too far away from other players in my unit? What if I go forwards and haven’t got someone covering me? The think defend, when attacking is all about decision making of where to position yourself when your team has the ball.

In order to help your players to be able to deal with negative transitions. They need to be able to react and repeat. Firstly, the immediate response of the player that has lost possession of the ball is the one that you need to focus on. Is the response to give up or look disappointed that they’ve lost the ball? If so, you need to work with this player and every single one of your players to build a mindset of if you lose possession to either win it back, or get back into shape for the TEAM. Not only is the player that has lost possession of the ball critical, it is also vitally important that unit and other players within the team have the same reaction too. The challenge for you as a coach, is to develop an environment that builds your players mindsets to be continually be able repeat these reactions once they’ve lost the ball.

Out of Possession Principles:

Delay – How will you delay the opposition from attacking i.e. decision making of when to press and when to drop. We have seen contrasting examples of how teams can apply this principle to create positive transitions with Atletico Madrid often delaying the opposition by dropping deep https://footballdna.co.uk/features/key-principles-of-defending-deep/) into their half where as teams like Liverpool will look to counter press and win the ball back https://footballdna.co.uk/features/pressing-high-in-the-final-third/ immediately to build or exploit through a counter attack.

Compactness – Is the distances between individuals / units both laterally and horizontally to deny space between them to prevent the opposition playing into. The compactness of your team will make it difficult for the opposition to play between but also giving you more opportunities to block and intercept to create an opportunity for you to begin a positive transition.

Balance – In order to cancel the threat of mobility provided by the offense, balance is required by the defending team to retain defensive shape. Balancing is an extension of delay and compactness with your team ‘sliding’ across the pitch in order to provide horizontal compactness. A helpline can often be deployed down the middle of the pitch, with your team defending half the pitch when the ball is on one side. This will help you as a team to have sufficient numbers to limit being overloaded by the opposition.

Depth – Relates to how deep your players will be individually as a unit as well as a team. Providing depth will ensure the opposition isn’t able to exploit the space in behind, however, some teams may to decide to play a high line to maintain compactness and when pressing. When possession is won by your team, you may need to look at how you can exploit the oppositions lack of depth by how you can play in behind or evade pressure from them.

Control & Restraint – Refers to the decision making of players of when to step in to intercept or win the ball from the opposition. Making an incorrect decision on this may allow the opposition to exploit space left by that individual or unit. Understanding triggers are critical in when your team should leave their defensive shape in order to apply pressure/intercept to begin a positive transition. Examples of these triggers may be when the opposition has their back to goal or when the ball is played into a particular area of the pitch.

When approaching a negative transition, a simple way of helping you and your players with understanding how they can deal with this apply the ‘before, during and after’ approach’. How will your team set up when in possession of the ball to prepare for the loss of possession i.e. what are distances of your players between them? Are they aware of the opposition that may be able to exploit space if possession is won? What is the reaction of the individual that loses possession or the surrounding unit, do we press or drop? Are we in a position to win the ball back quickly? After the ball is won, how will we as a team secure possession?

Before – How will you set up defensively when your team has possession of the ball?

During – Once possession is lost, will your team attempt to win the ball back quickly or drop and regain their shape?

After – The decision is made of when to press or drop, how will we as a team attempt to win the ball back and secure it?

Individual and/or group tactics will need to be developed in order to help your players to understand how to use transition from a regain. Tactics consist of ‘a planned action to gain an advantage or achieve a specific end’, which in the case of dealing with a negative transition it is important your players understand how they need to set up whilst in possession to deal with any loss of possession but also what their strategy is going to be once possession is lost too. A simple strategy for you to work with your players on is the ‘six second rule’. The six second rule consists of once your team losses possession, they look to win the ball back in 6 seconds. If they cannot win the ball back in 6 seconds, they look to then quickly regain their shape and get back in balance. By supporting your individuals, units and team to understand the 6 second rule, you can then look at develop tactics which will help you to achieve success nullifying the threat of the opposition team being able to exploit via the counter attack.

When looking at positive transition and how you may develop it in your environment their may be certain attributes or traits that you may need to develop within your players to enable you to do this effectively as a team. Below details some of these areas using the Four Corner Model:

Physical – Ability to win 1v1 duels, maximal speed to recover quickly if the opposition are counter attacking, agility to change direction quickly to intercept and block, endurance to perform repeated sprints once possession is lost to win the ball back or get back into shape

Psychological – React positively to the loss of possession, ability to repeat reactions, work rate recovery quickly as an individual for the team, concentration to scan and be ready to intercept/win back possession

Technical/Tactical – Individual defending technique, decision making of when to press and when to drop, positioning to cover/support your team mates

Social – Communication within a unit to react to trigger of pressing/dropping, working within your unit and as a team to deal with loss of possession

Jurgen Klopp – “The best moment to win the ball is immediately after your team just lost it. The opponent is still looking for orientation where to pass the ball. He will have taken his eyes off the game to make his tackle or interception and he will have expended energy. Both make him vulnerable.” 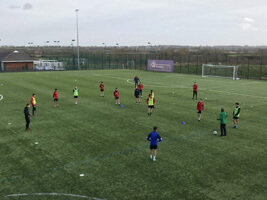