In mini soccer, how children play out from the back has changed in recent years due to the introduction to the retreat line which gives the team restarting from a goal kick of waiting for the opponents to retreat into their own half before playing out or sooner. In this piece, I am going to explore some different ways that you may want to apply the attacking principles of play to support you in playing out from the back and how you may coach this within your sessions. It’s important to remember that when working with children in the mini-soccer age groups that training should not be used to prepare for a match, however, you may want to work on a particular theme or topic to help bring out some of the basic principles and techniques for your players as well as helping them to problem solve and make good decisions too.

Dispersal: When playing out from the back in mini soccer, dispersal or ‘making the pitch big’ is a great beginning point for you to focus on when working with your players. You can often find restarts (goal kicks, free kicks) as well as when the goalkeeper has control of the ball after making a save a great opportunity to encourage your team to create width and depth with their movement. Encouraging your team to do this quickly like an ‘elastic band pinging’ will help them to provide the goalkeeper with more options to find them as they move into space. A quick dispersal will also allow you to take advantage of the team retreating into their own half and may allow for you to play out from the back quickly whilst they are transitioning back into their own half too. Likewise, by your team creating width and depth if the opposition team retreats it will allow for your players to be in space and all players ready to receive the ball. 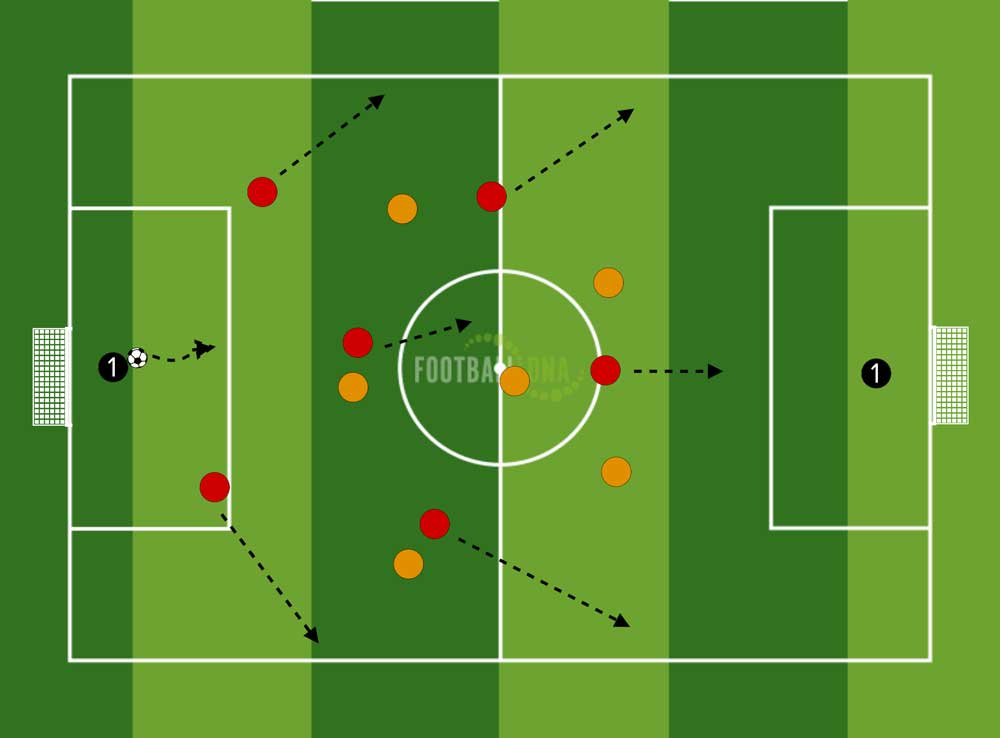 Penetration: Can take place behind or between players, outlined below are some passing lines that you may use as a point of reference to support your team once they’ve created width and depth when looking to play out. Your goalkeeper can look to play into the space behind or between players to penetrate but also players can penetrate through travelling with the ball or beating players to move into space as well. If you’re playing out from the back and the defending team moves across to one side of the pitch, encouraging your players to maintain width may also help you to penetrate by playing out the defenders too. To help your players play out from the back you should encourage your team to be brave and take risks to get on the ball and stay on the ball too. Players that are confident to penetrate individually through passes or travelling with the ball may need encouragement to be willing to do this in your training sessions and games. In addition, support may be needed to encourage your goalkeeper to make the right decision of when to build and when to counter. 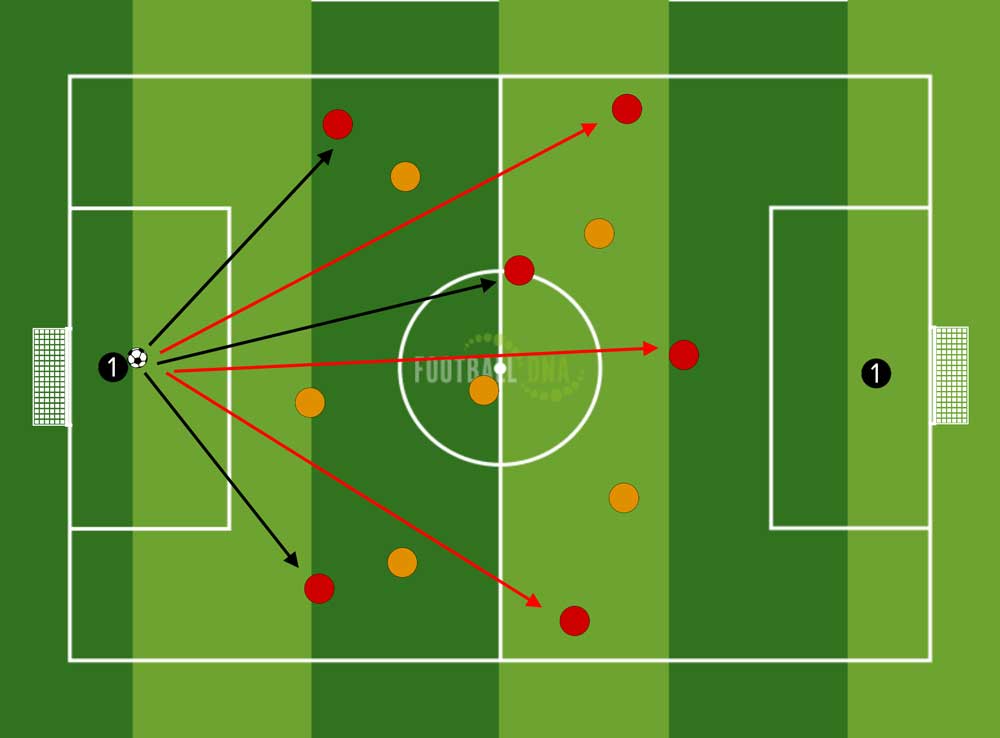 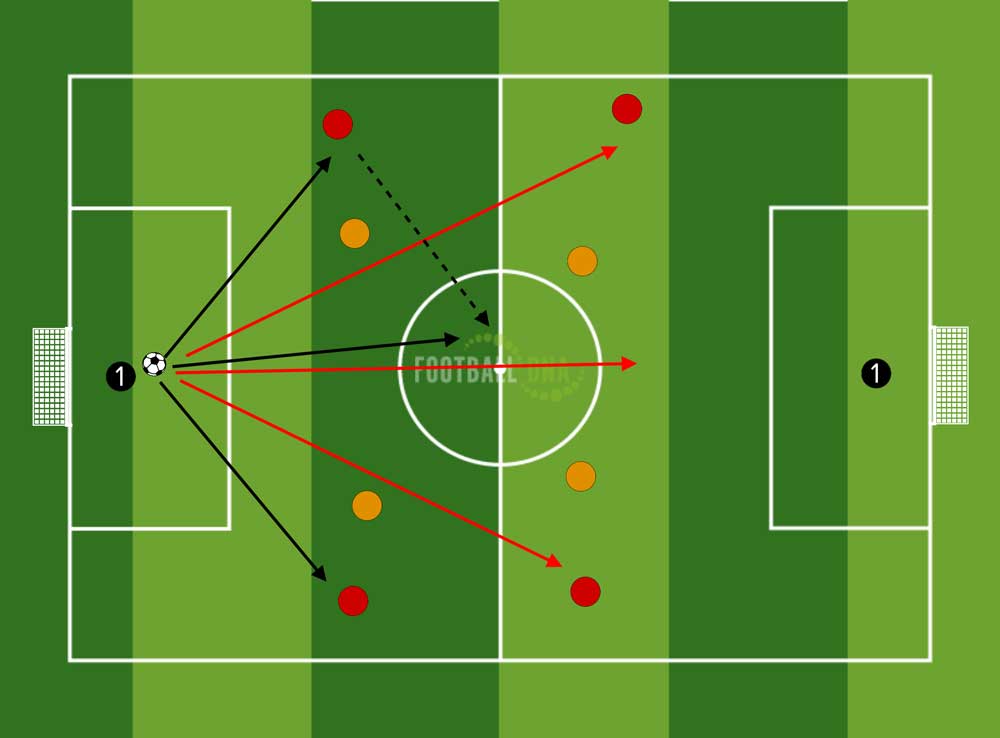 Movement: How individuals move between the opposition and behind them will be supported by the team looking to dispersing as well as individuals looking to find ways of penetrating too. Players should look to move when playing out from the back in 5-aside or 7-aside to create space for themselves or for their team mate. Movement may take place to vacate a space and for one of their team mates to fill it. Movement may also be needed if the opposition are locked on/man to man when defending to evade their opponent to allow them to free themselves to receive in space. Once the ball is in play, players should be encouraged to move away from the player on the ball to help them to travel into space, if the opposition then presses this player they may need to move to create an angle to receive the ball from that player. Support players to make movements that allow them to see the player that they are looking to receive from as well as the space/player that they are looking to play into. 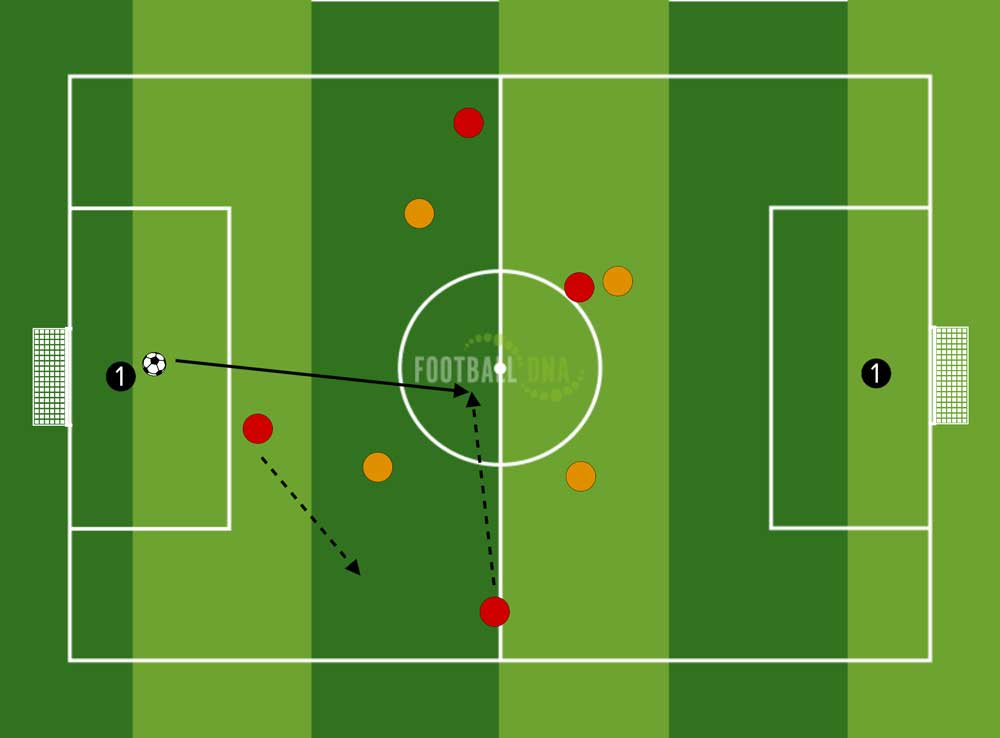 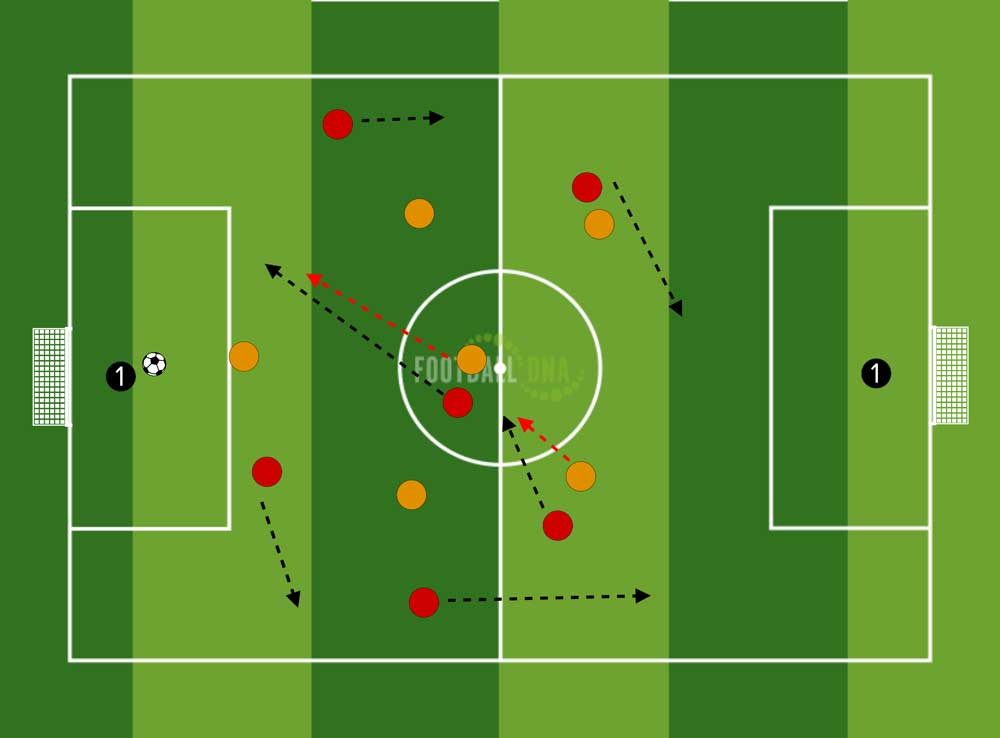 Support: Should be offered behind or in advance of each player when in possession of the ball. Due to the nature of mini-soccer, there are an increased number of 1v1 duels that will take place and players will often receive and need to play in tighter spaces than what they would normally have on the larger pitches. Players providing support behind the ball will help the team retain possession and change the point of attack as well as give individuals the opportunity to evade pressure by playing back to their team mates. Players providing support in advance of the ball will allow the team to create goal scoring opportunities as well as space for the player in possession of the ball, if the opposition are to drop deeper due these players moving in advance of the ball to support this will also help the team to play out from the back too. 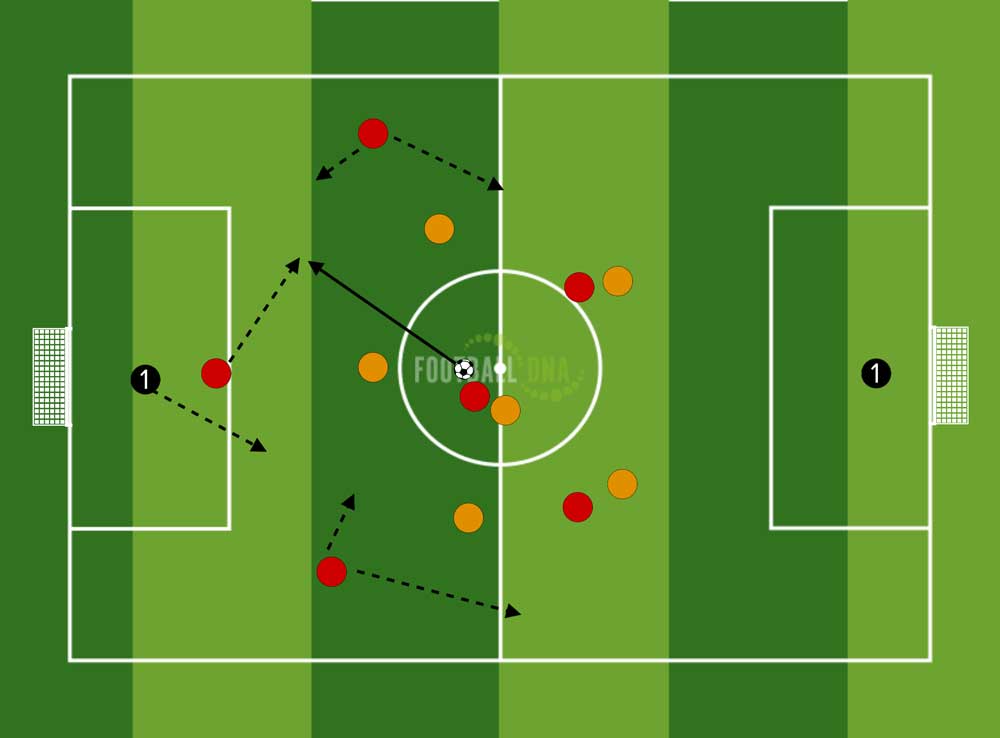 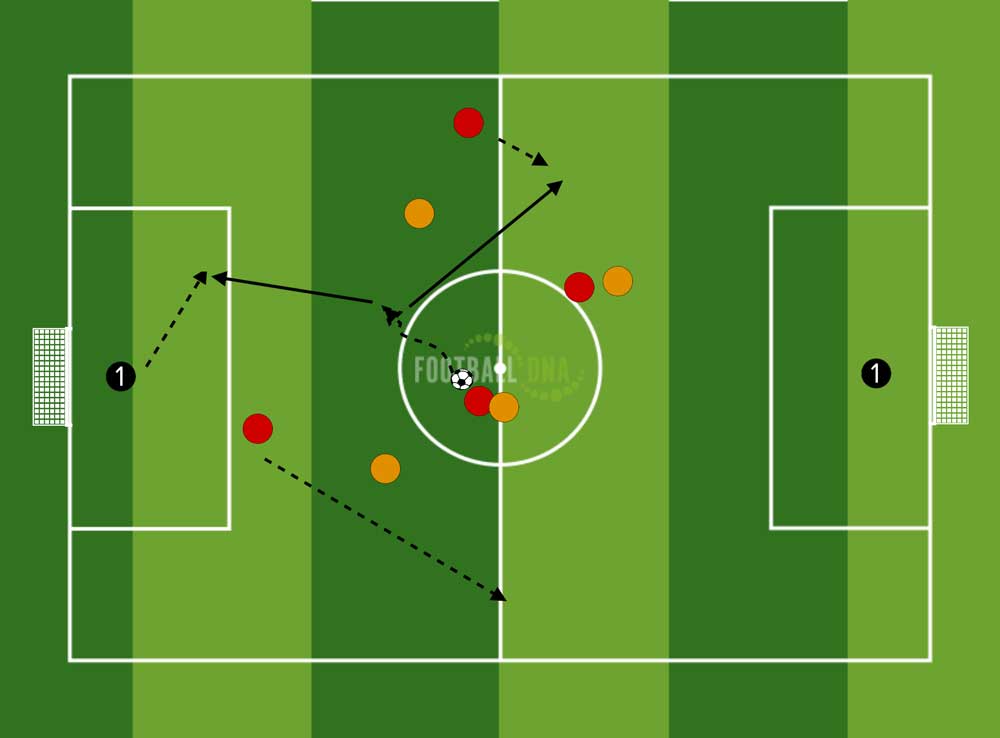 Innovation/Creativity: When your team is playing out from the back in mini-soccer you should encourage players to be creative and to beat players and break lines individually as well as collectively. Due to there being fewer number of players on the pitch, players will be given opportunities to combine with one another. Creative combinations between players will allow them to break lines and take defenders out of the games. Individuals who are able to beat players or take players out of the game by travelling with the ball will also help the team to be able to play out from the back. If teams press high or lock on, individuals will need to be able to stay on the ball to create space for themselves or their team mates. 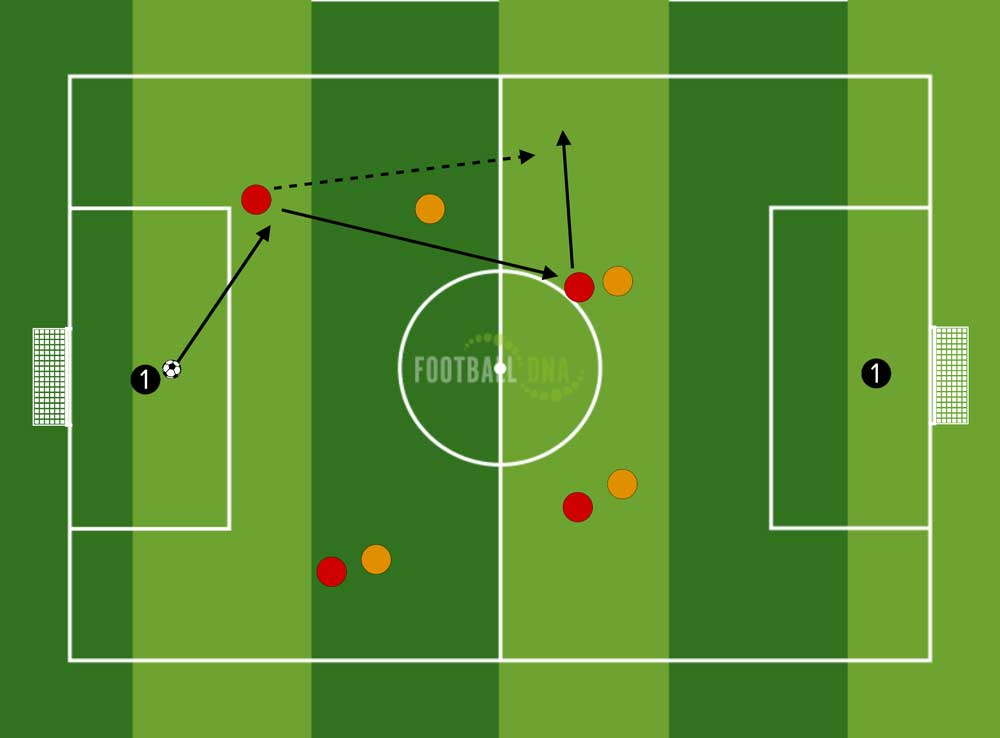 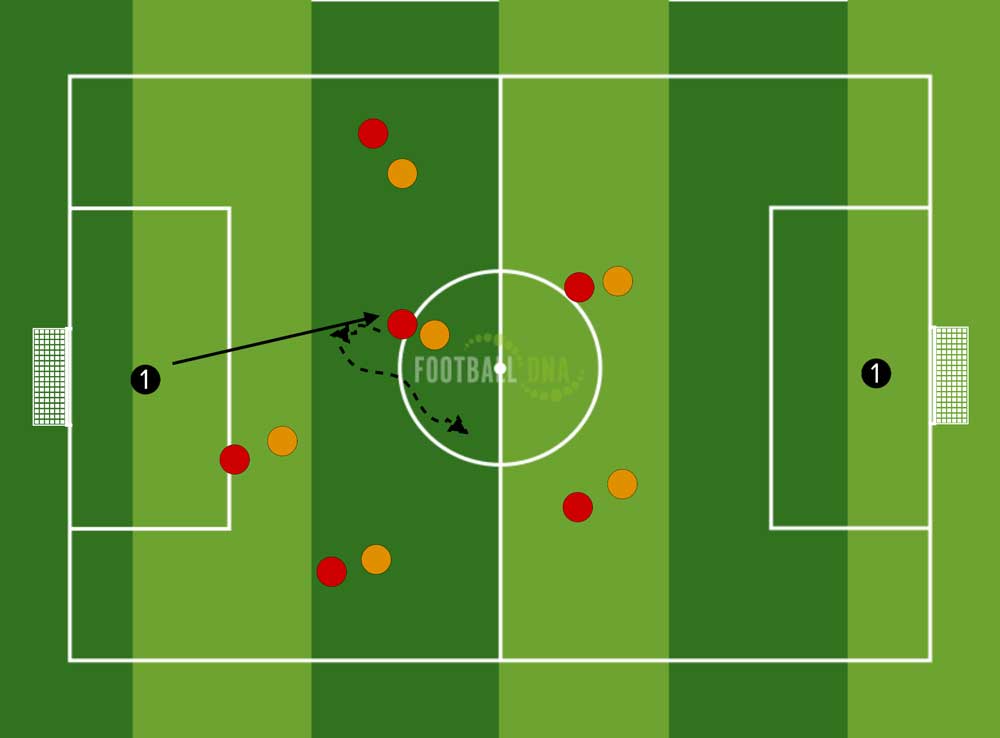 Technical Needs: As a coach, you will need to support your players to be able to receive, pass and travel with the ball on both sides to help them playing out from the back. Working with your players in training by creating practices which include decision making and problem solving as well as opportunities for them to practice on both sides will be beneficial for them. Due to the nature of mini-soccer, players will have to receive and play at different angles and supporting players in your sessions to play in multi-directional practices will be of great benefit to them too.

Developing Decision Making/Problem Solvers: Players shouldn’t be encouraged to just pass or to play long to evade pressure. We as coaches have a responsibility to support players to become independent decision makers that can find solutions to problems. When playing out from the back, problems will occur all of the time for individuals as each situation will be different and they will need to have the tools to independently find ways of solving the problems. Therefore, when approaching your sessions make sure you put practices and constraints in place that challenge your players appropriately and support them in finding ways of solving the problems as well as making the right decisions. Due to the nature of working with children in these age groups, failure plays an important part in learning and children will need to be given opportunities to fail to learn and find ways of solving problems and eventually making the right decision. 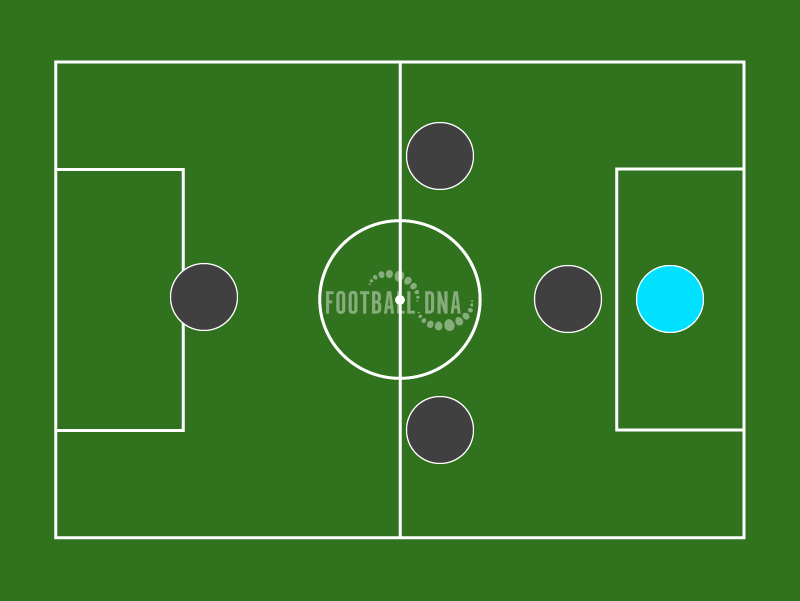 Formation Analysis:5 a Side 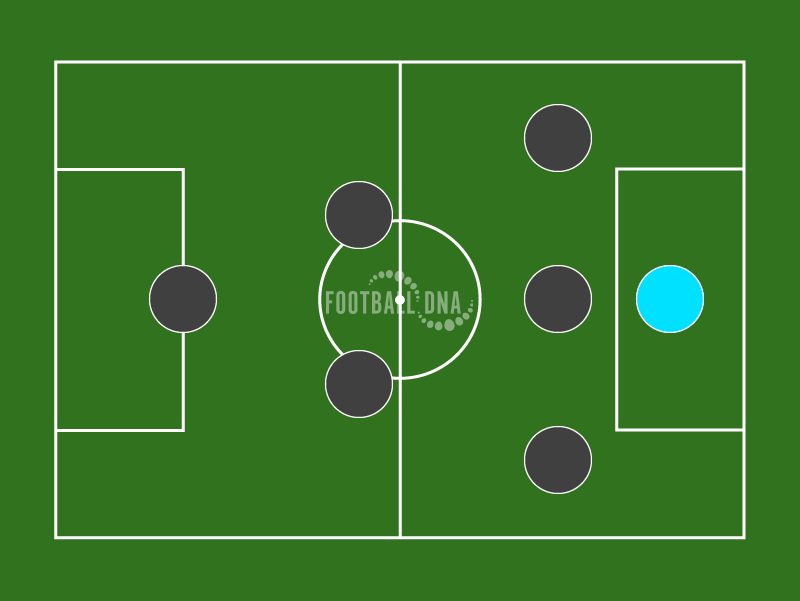 Formation Analysis:7 a Side 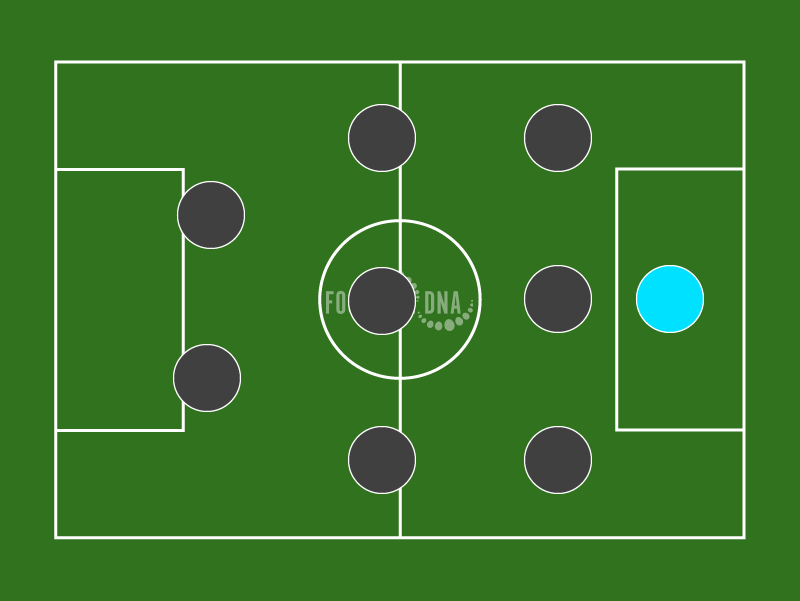 Formation Analysis:9 a Side