Playing through midfield can happen in a variety of different ways in both the Foundation Phase and Youth Development Phase. In this tactical analysis piece, we are going to explore some of the different ways you can play through midfield as well as the key coaching points and principles too. This is not the way, just a way and we would encourage coaches to consider how they want their team to play, what types of players they have and how they want to coach it i.e. types of practices etc.

To help link this to our previous write up on the attacking principles of play, we are going to look at these principles and what they mean specifically for what players when you are looking to play through midfield.

Players should look to disperse and create width and depth to create space for themselves but also for the player in possession of the ball. For example, if the goalkeeper has the ball and we can encourage the team to create both width and depth it will give the goalkeeper the option to play over, through or round. For example, the full backs can create the width and play behind the forward line of the opposition as well as the midfield to create width and look to position themselves between the opposition midfield players. A good way of supporting players in 11 v 11 or even smaller formats is to channel off the pitch horizontally into five or three channels. By the team creating both width and depth, it will also allow the team to build and be patient waiting for the right time to exploit the space that they have created beyond or between the opposition players. See the diagram below which shows a couple of examples of how the goalkeeper or centre back may be able to do this. If the opposition team drops off, this may create opportunities for the centre backs to step in with the ball themselves to then look to play through midfield. 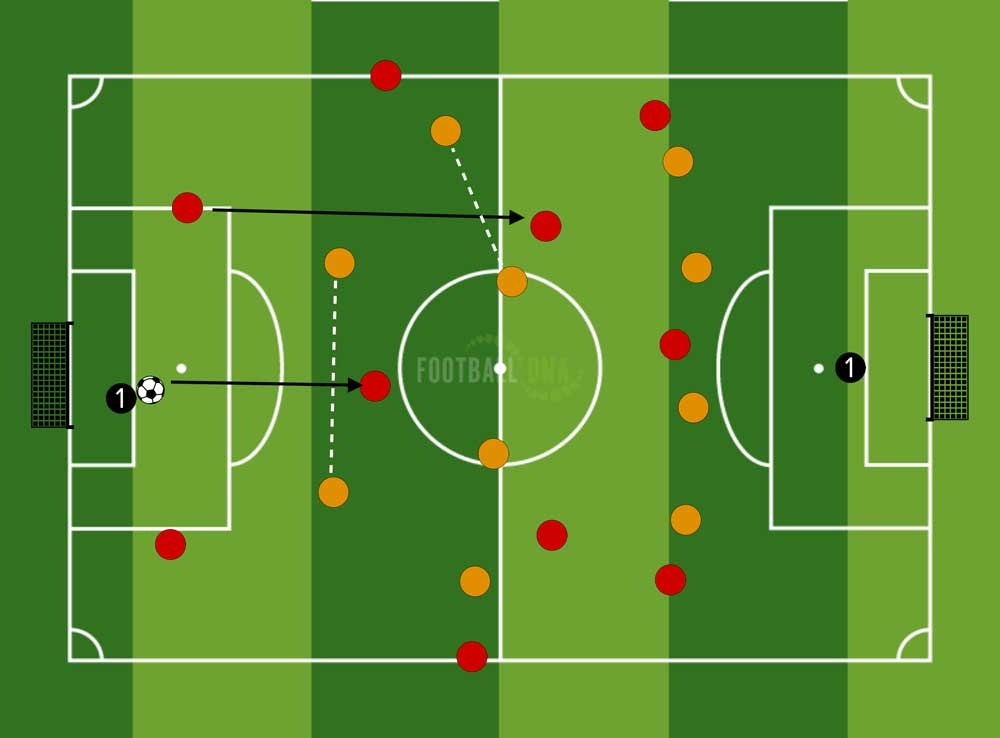 This is the same in mini-soccer and the team should look to create width and depth too. In the diagram below, encourage players to position themselves where they can look to exploit space between players. A great way of supporting players on this is to encourage them to stand in a position where they can see their opponents back or number on their shirt. Naturally younger players will be attracted to the ball, therefore, the more that you can highlight players that are looking to position themselves in areas that can exploit space beyond or between opposition players.

Players can penetrate and play through midfield with passes or stepping in with the ball. As explained above, when the team create space through their positioning to make width and depth this will allow the team in possession of the ball to be able to exploit the spaces between the opposition players. Players may be able to do this through passing between players to eliminate opposition players or alternatively, stepping in with the ball themselves and driving into the space as well. To support this, encourage players to receive with an open body shape to be able to play forwards as well as checking their shoulders before they receive the ball too. This will help players to recognise spaces before they receive the ball and as a result help them to make the right decision as well execute the action needed. 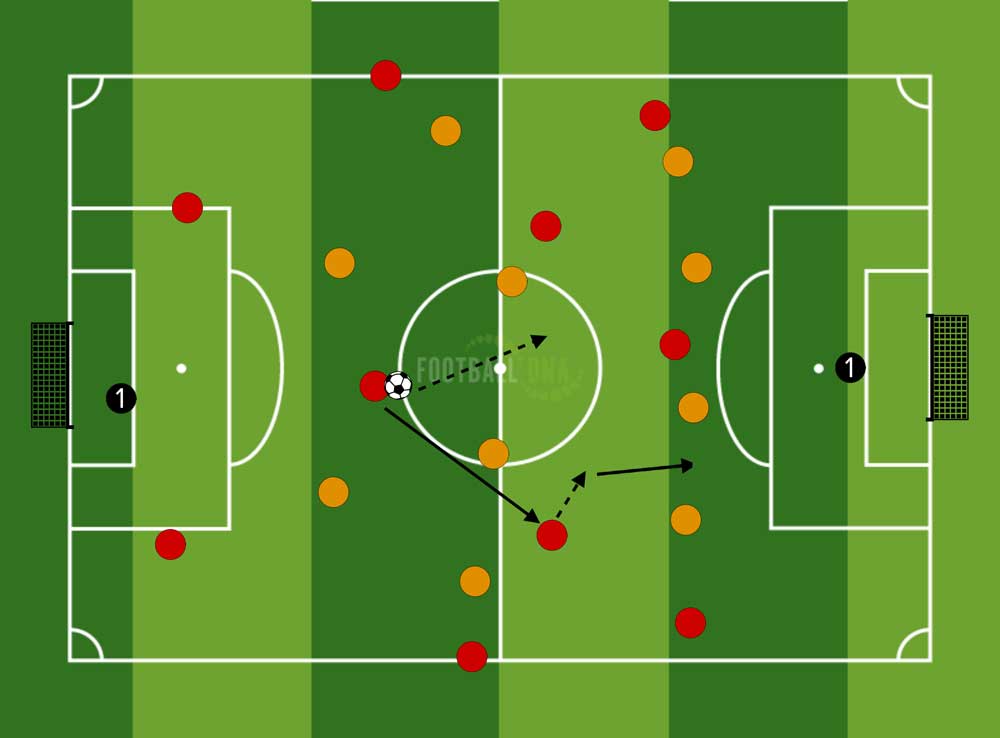 If the team is unable to play through as the opposition is compact, they may need to be patient and look to exploit space created around the outside of the pitch. For example, if the ball is played onto one side of the pitch and the player cannot play through themselves, they may need to look to switch play to go to the other side of the pitch to help them play through into midfield. Players should be encouraged to be patient in their build up and keep their eyes up to recognise how they will exploit space created by their team mates ahead of them. When switching play, encourage players to use a strong weight of pass to help them transfer the ball from one side to other quickly. By doing this, it will help them to exploit space as the defending team shifts across whether that be over, round or through. 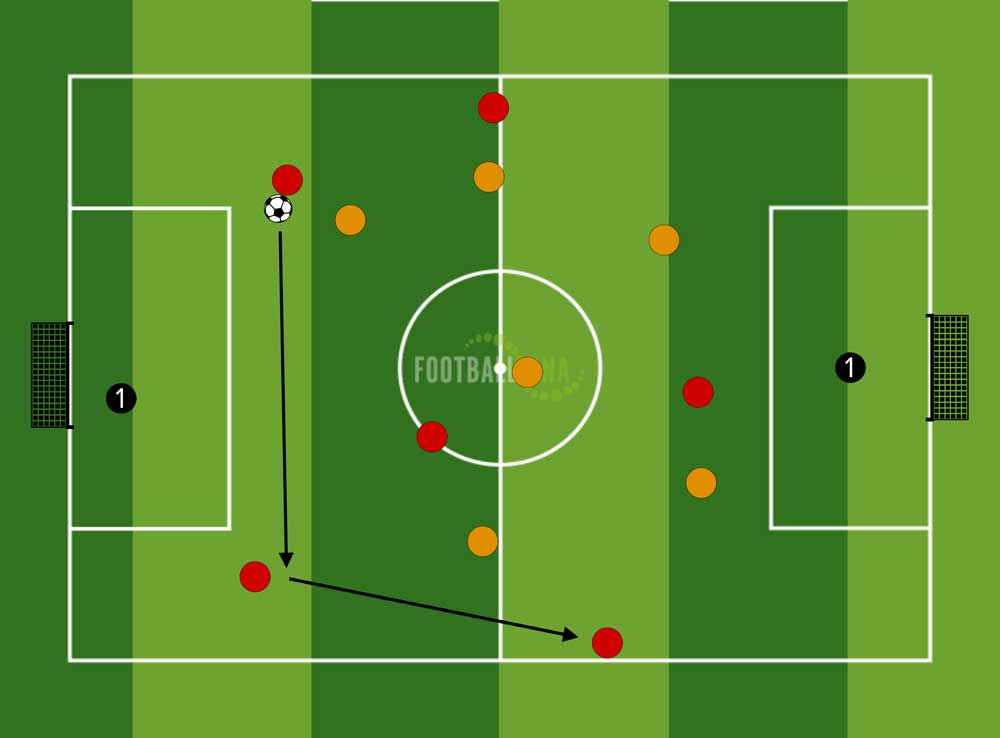 To help players both get on the ball as well as the player on the ball, players should look to move to look to receive between or beyond players wherever possible. In addition, encourage players to receive on different lines and at angles to help them when they’re looking to receive and play forwards. Movements may consist of players running away from the ball, or even moving backwards as they look to exploit space left between players. 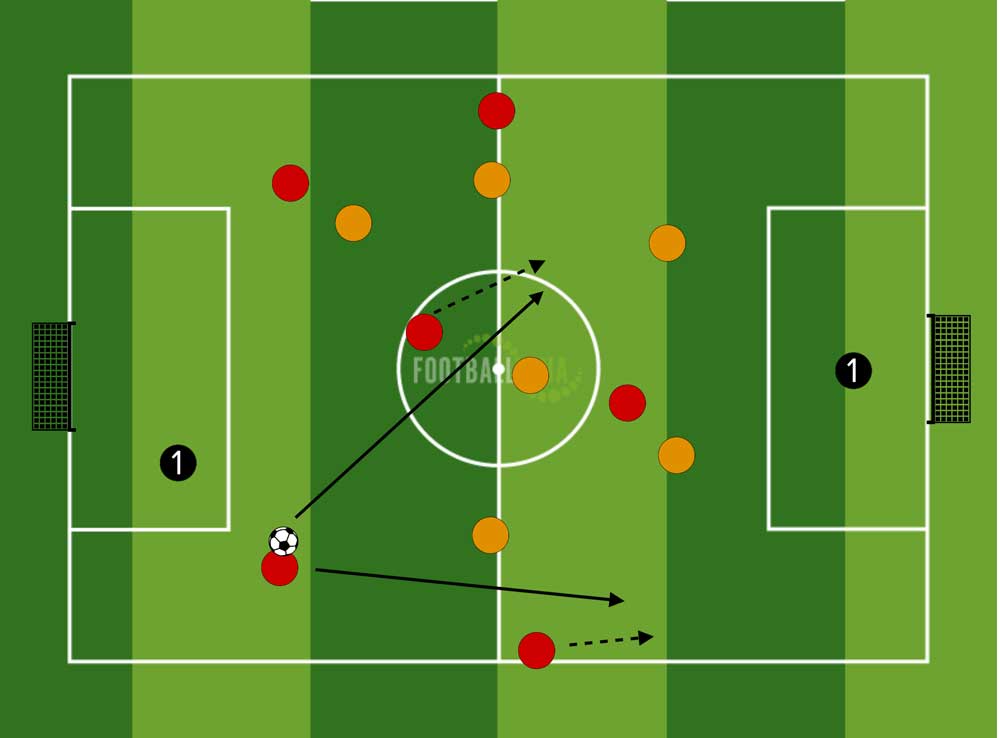 If players cannot receive the ball, they may need to use rotation to help them to vacate a space and then for one of their team mates to move into it to get on the ball. In mini-soccer in particular, you will often find opposition players will mark man to man and there will be more of a need for your players to rotate to make themselves available for the ball. Through rotating, you may drag the defender out of a space to allow another player to exploit it, likewise, it may simply be through that movement that players can receive the ball in space if the defender hasn’t followed or moved. See below an example of how this may look. 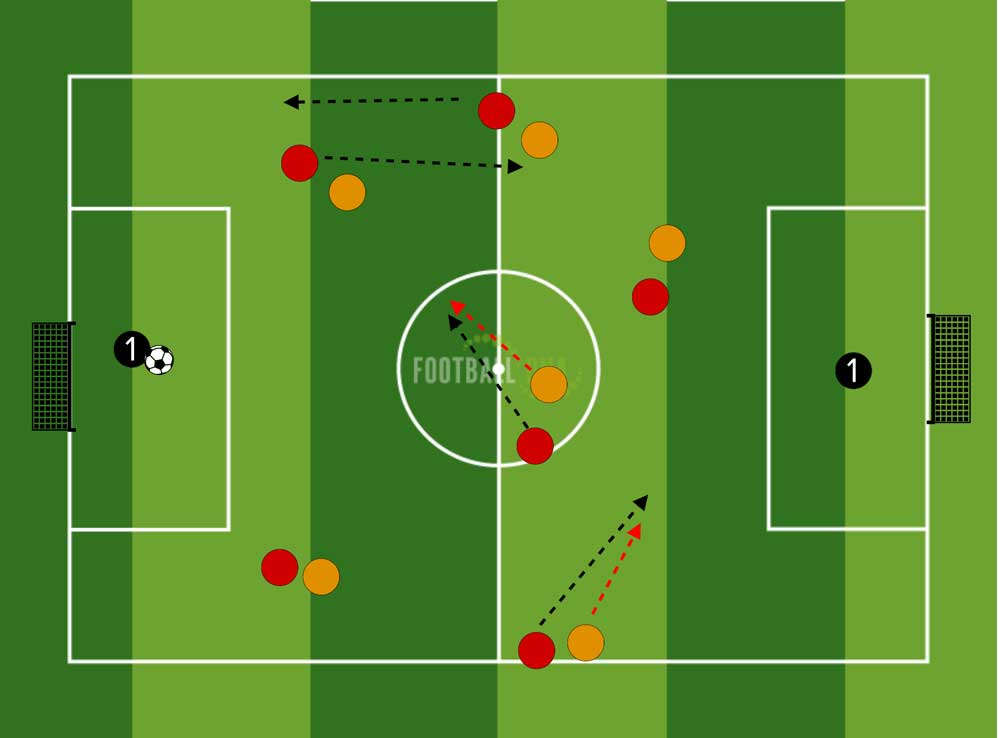 Once the ball has been played through midfield, support should be offered in front and behind the ball to help the player in possession of the ball to be able to play over, round or through. This is essential in order for the team to be able to have options in congested areas and help them team to exploit spaces between or beyond the opposition that they have left when moving into their defensive shape. See a couple of examples of how players may look to support the player in possession of the ball when playing through midfield. 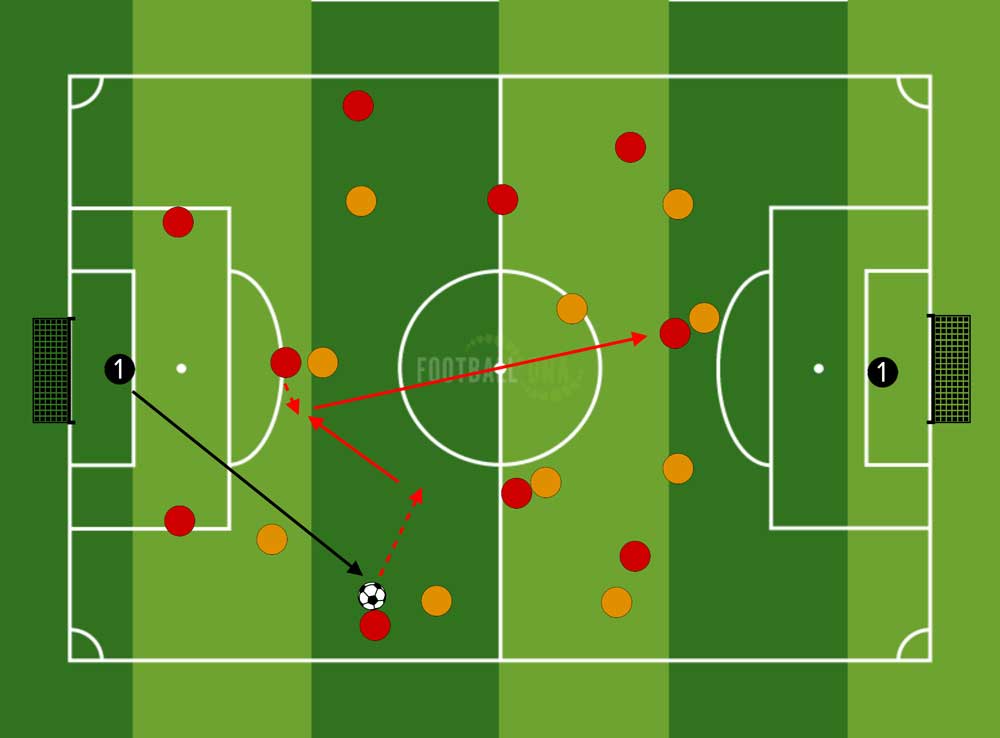 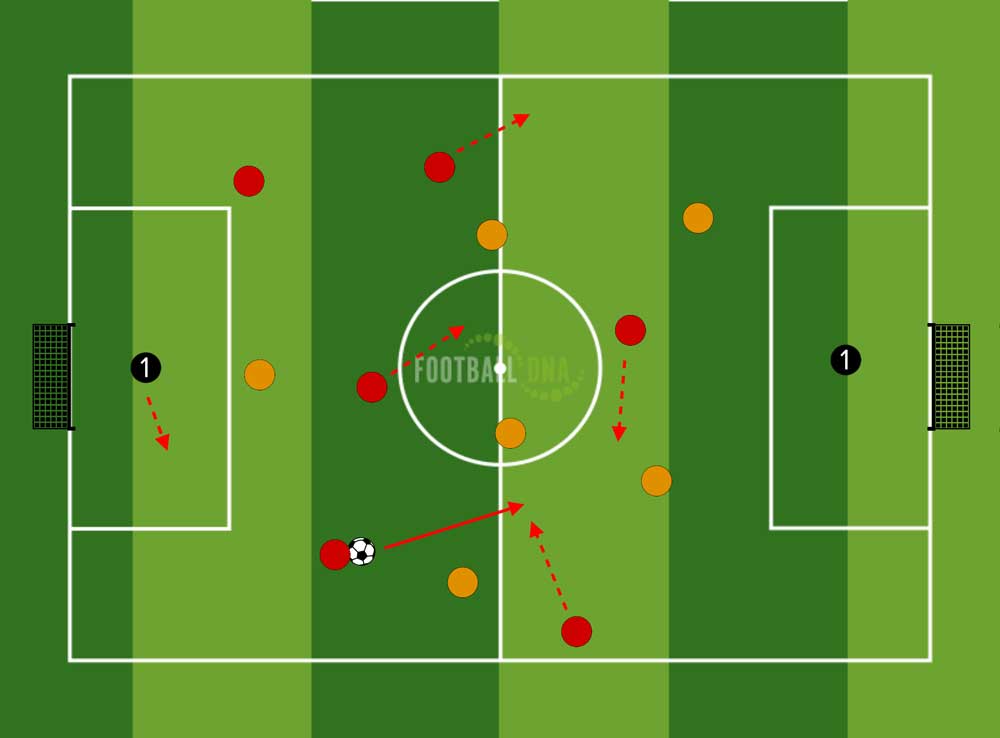 For players to play through midfield, they will need to have a range of different 1 v 1 skills that enable them to beat players and change direction as well be able to receive and pass with a variety of different techniques as well. For example, players may need to change direction to exploit space left on the opposite side of the pitch or be able to play a lofted pass to eliminate defenders too. Providing practices where your team is underloaded or playing through a press or a mid/low block will help players to start to think about their movements and what types of actions that they will need to play through midfield.

To summarise, here are some of the key coaching points that you may wish to consider when you’re working with your players to help them to play through into midfield:

Be sure to check out our Foundation Phase and Youth Development Phase practices for ‘Playing Through Midfield’ in our drills section. 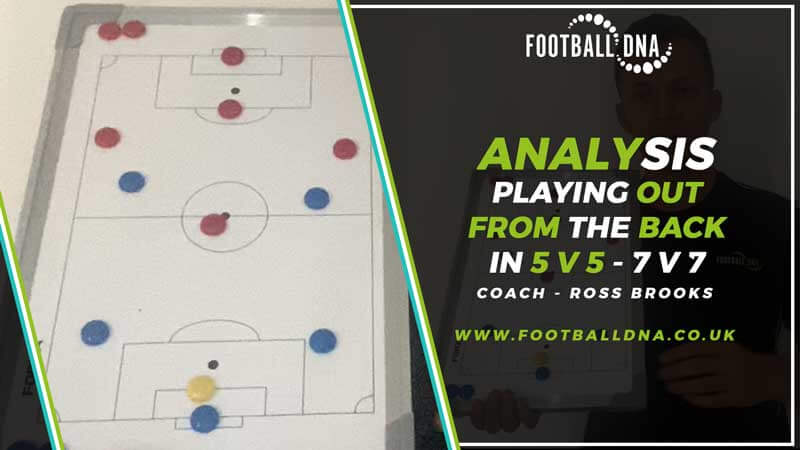