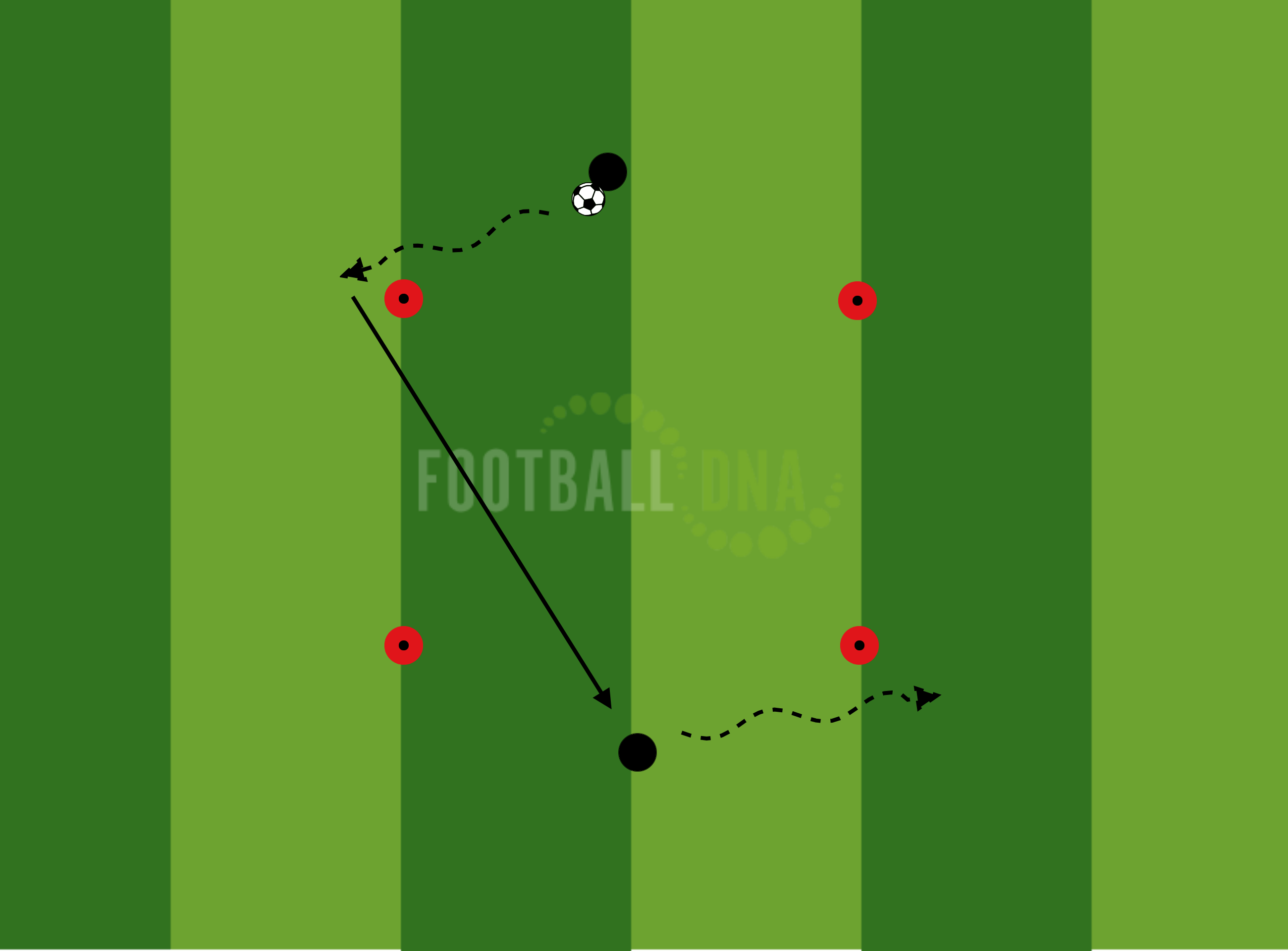 In this blog I will be exploring some ideas for how coaches can deliver passing and receiving practices whilst maintaining social distancing with their players. This follows on from last weeks blog where I gave some advice on how you can deliver quality sessions in this period of time: https://footballdna.co.uk/6-social-distance-training-sessions-tips-ideas/. Constant practices or unopposed practices can be very important for players to be able to learn and develop a skill and should be utilised during this period of lockdown both for when players are working independently but also when in small groups too. The practices below are simply practices that can be adapted with the STEP principle to help you meet the needs of your players:

STEP: Adjust the size of the area to make it bigger or smaller, which will vary the challenge for the players. Players should also be challenged to use different types of passing (outside, chipped, inside etc) and different type of receiving (sole, inside, outside, laces etc). To also progress this further, you may also add a defender in the middle of the area who has to block and intercept passes whilst staying inside the box. 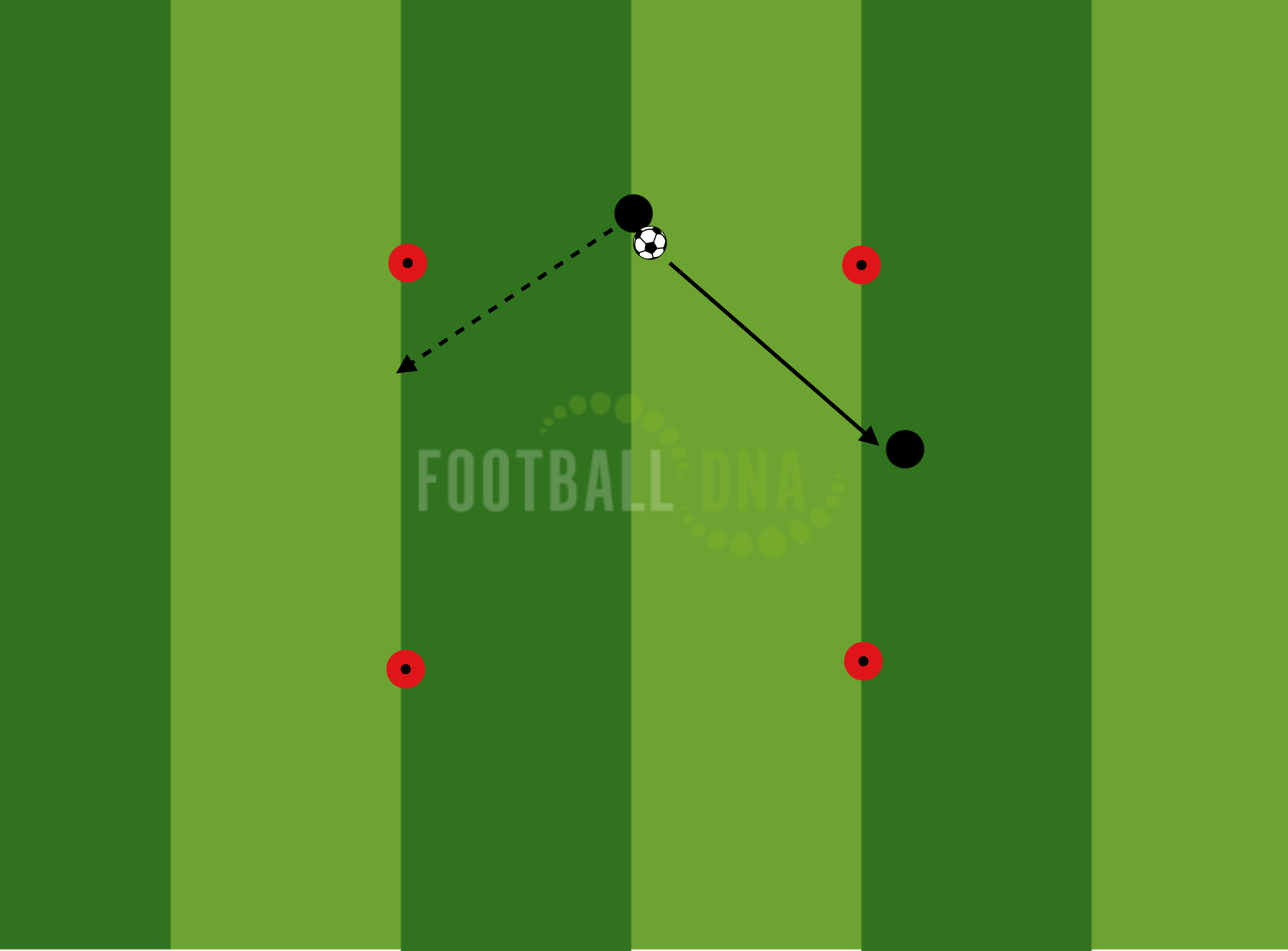 STEP: Adjust the area by making it larger or small but you can also change the area to a grid by have other lines that they can receive on. Limit the amount of touches players can have or allow players to travel with the ball to another line before they can pass it. You may also wish to add a defender in the middle of the box that can block and intercept passes as well. 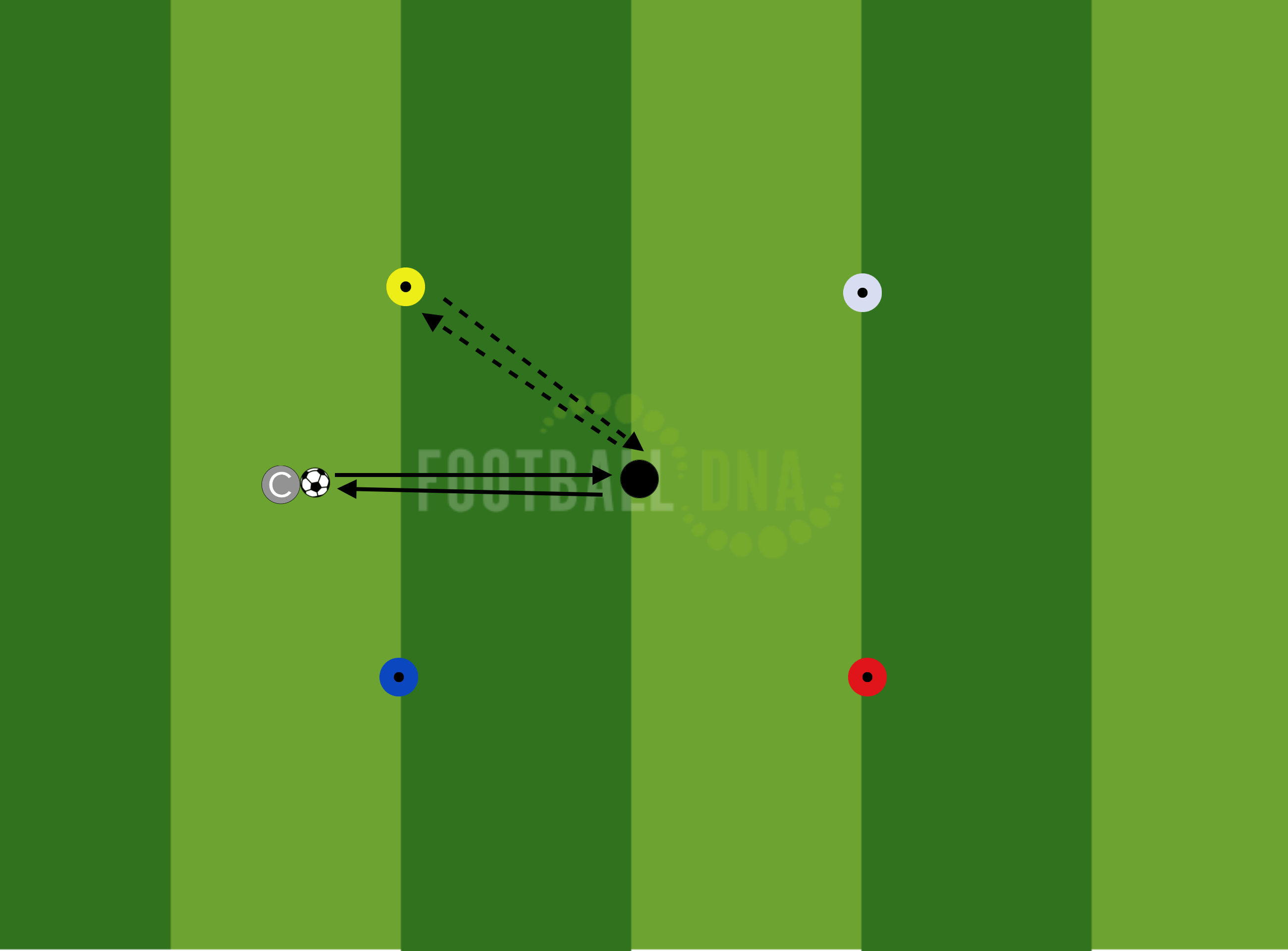 Organisation: Set up a 10 x 10 area with four different colour cones and a player inside the box. The other player is on the outside of the box and begins with a ball, before they pass the ball they call a colour that the player inside the middle of the box has to move to after they pass it back. Rotate the target player regularly.

STEP: Adjust the size of the area to vary the distance for the player in the middle to have to move too. Rather than the player moving to the colour that is called without the ball, they now have to move with the ball and pass back to the target player once they get to that colour cone. If appropriate, add more players if needed on the outside of the square acting as target players. 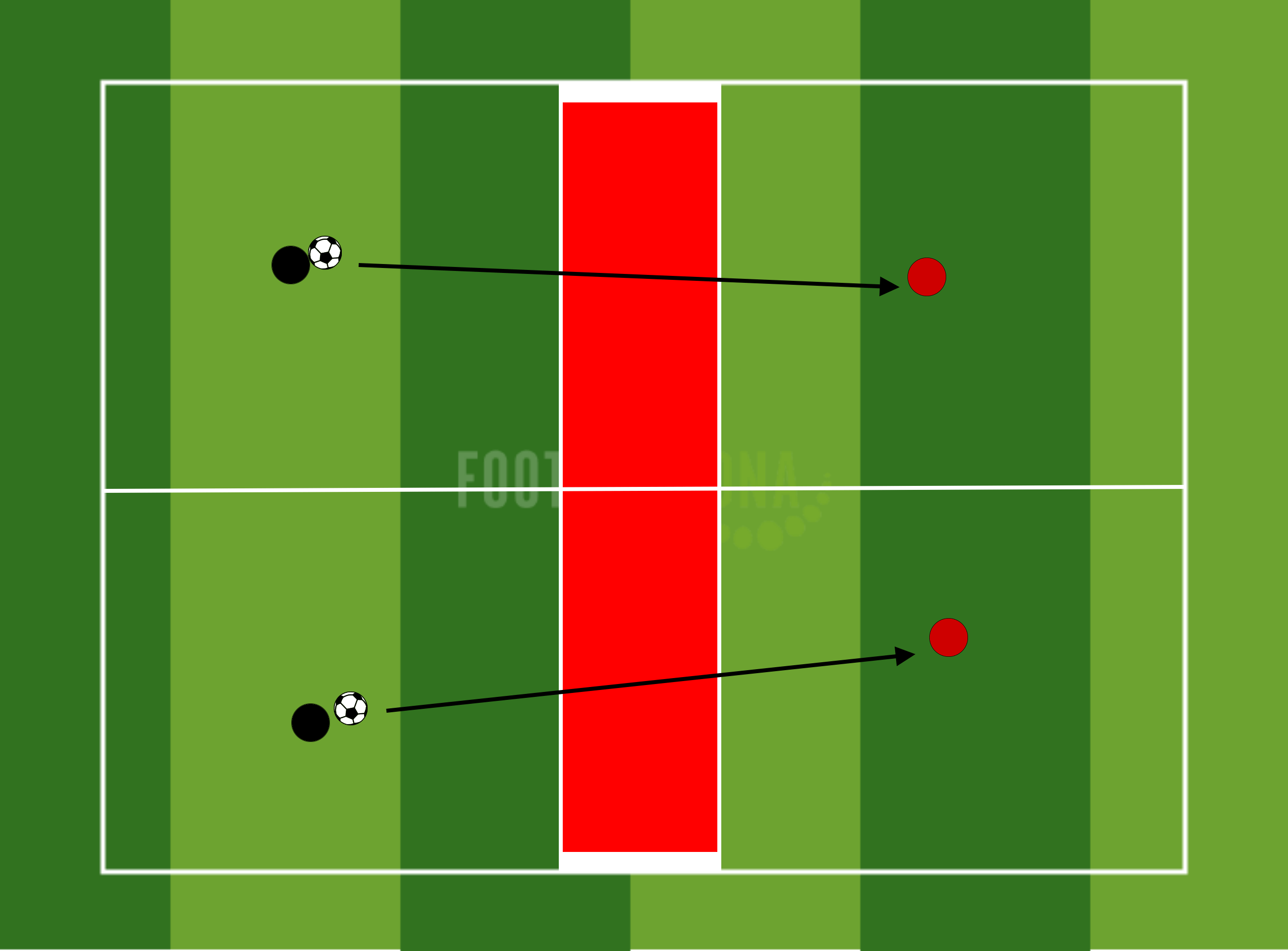 Organisation: Set up a 20 x 20 area and split it into four different sections. Add a separate 5 x 20 channel through the middle of the pitch that is no mans land’. Players are working in pairs and a ball between them, they have to transfer the ball between one another without the ball entering no mans land. If the ball enters the middle channel, the other player receives a point.

STEP: Adjust the size of the area for the players to pass over as well as the box that they have to receive within and the middle channel they have to player over too. Players can be limited to an amount of touches or a time limit before they pass the ball over to the opposite player. Add mannequins, poles or any other equipment in the middle channel for players to avoid hitting when passing the ball across to the other side. 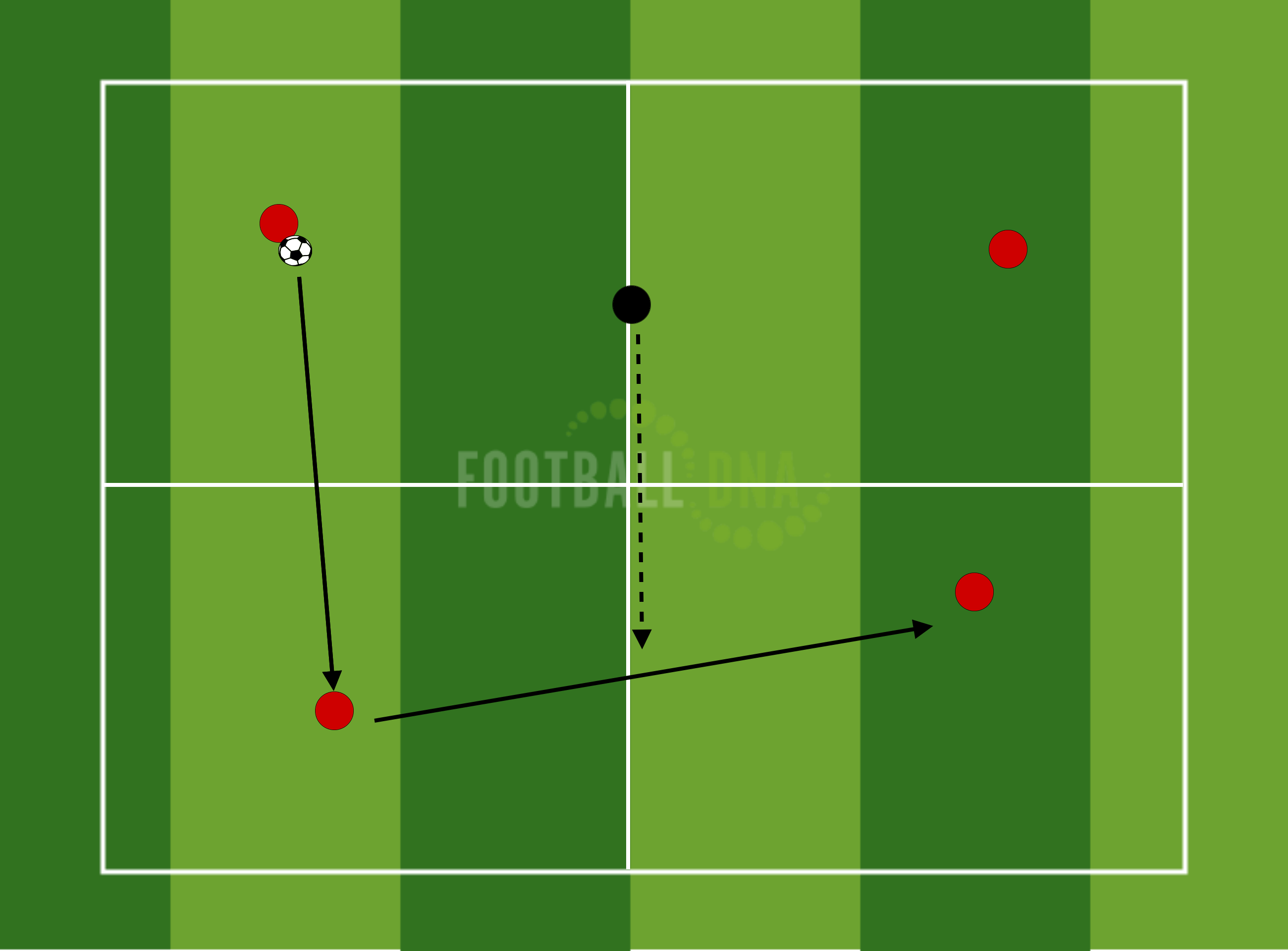 Organisation: Set up a 20 x 20 area and split the area into four with a player in a box each as well as one defender that begins on one of the lines. The attackers have to pass between them whilst avoiding the defender who must stay on the lines in the middle whilst attempting to block and intercept passes. If the defender wins the ball or the attacker miss controls the ball or their pass, they’re to swap places with the defender. 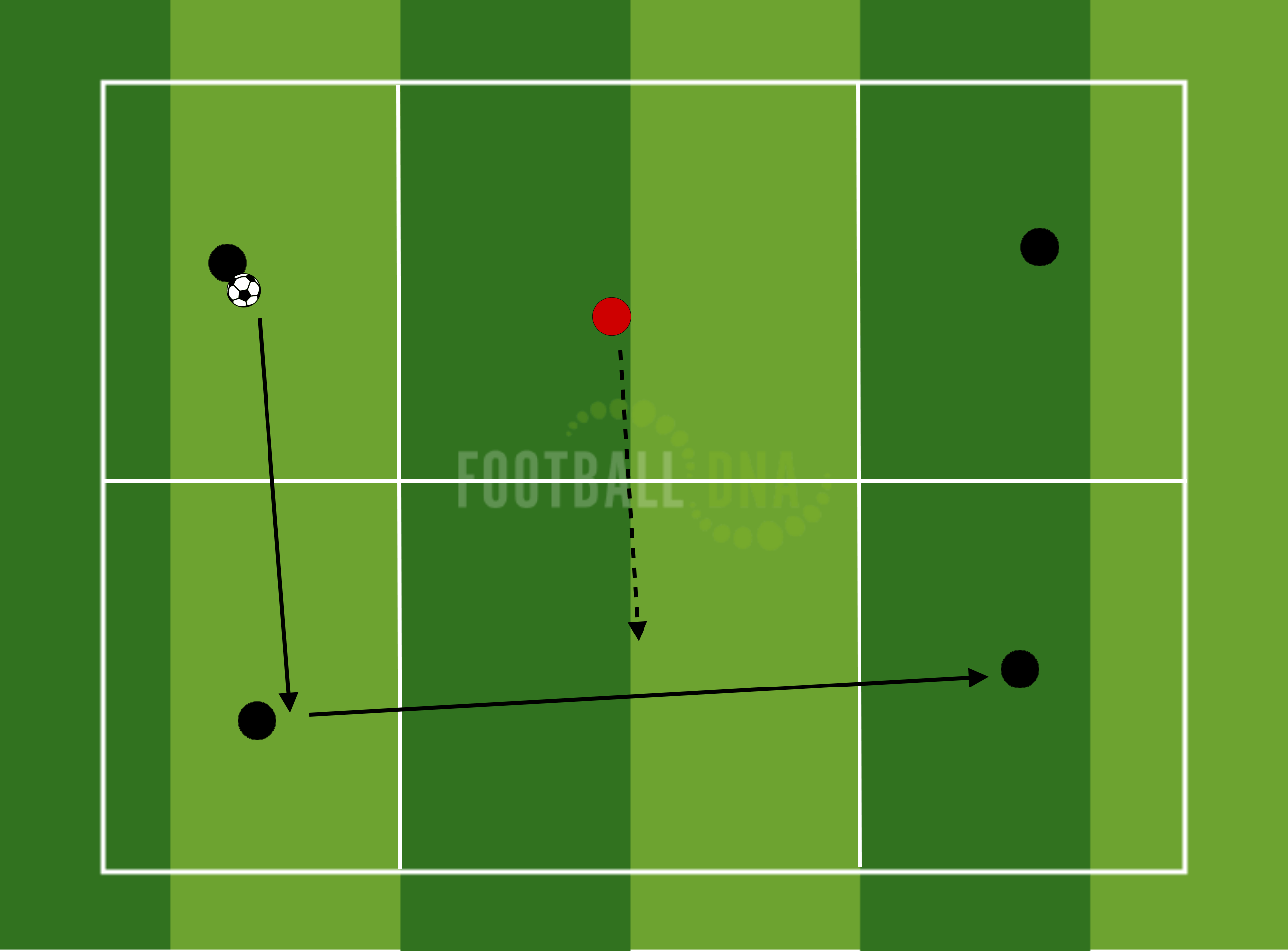 STEP: Adjust the size of the boxes to vary the challenge. Players can be limited to a number of touches or a certain amount of time with the ball in their box which will encourage them to move the ball quickly. Introducing an overhead height rule may also be needed to make the task more challenging for the players keeping the ball as well. Add another defender to make it a 3 v 2 if you need to make the game more challenging for the players keeping the ball.

If you need more information on the government guidelines for social distancing as well as ideas of how you engage your players during this period with social distancing sessions, please see my previous blog from last week. Also, for more ideas visit our ‘Individual Skills Program‘ which provides players with not only an opportunity to learn new skills but also progress through levels to challenge them along the way. I’d certainly encourage any coaches to use this program to help their players but also to give you ideas on how you can work as a coach with individuals as well as in small groups.

For more information on these rules that have been in place since June 1st 2020, please visit: http://www.thefa.com/-/media/thefacom-new/files/get-involved/2020/football-restart-guidance-1-june.ashx