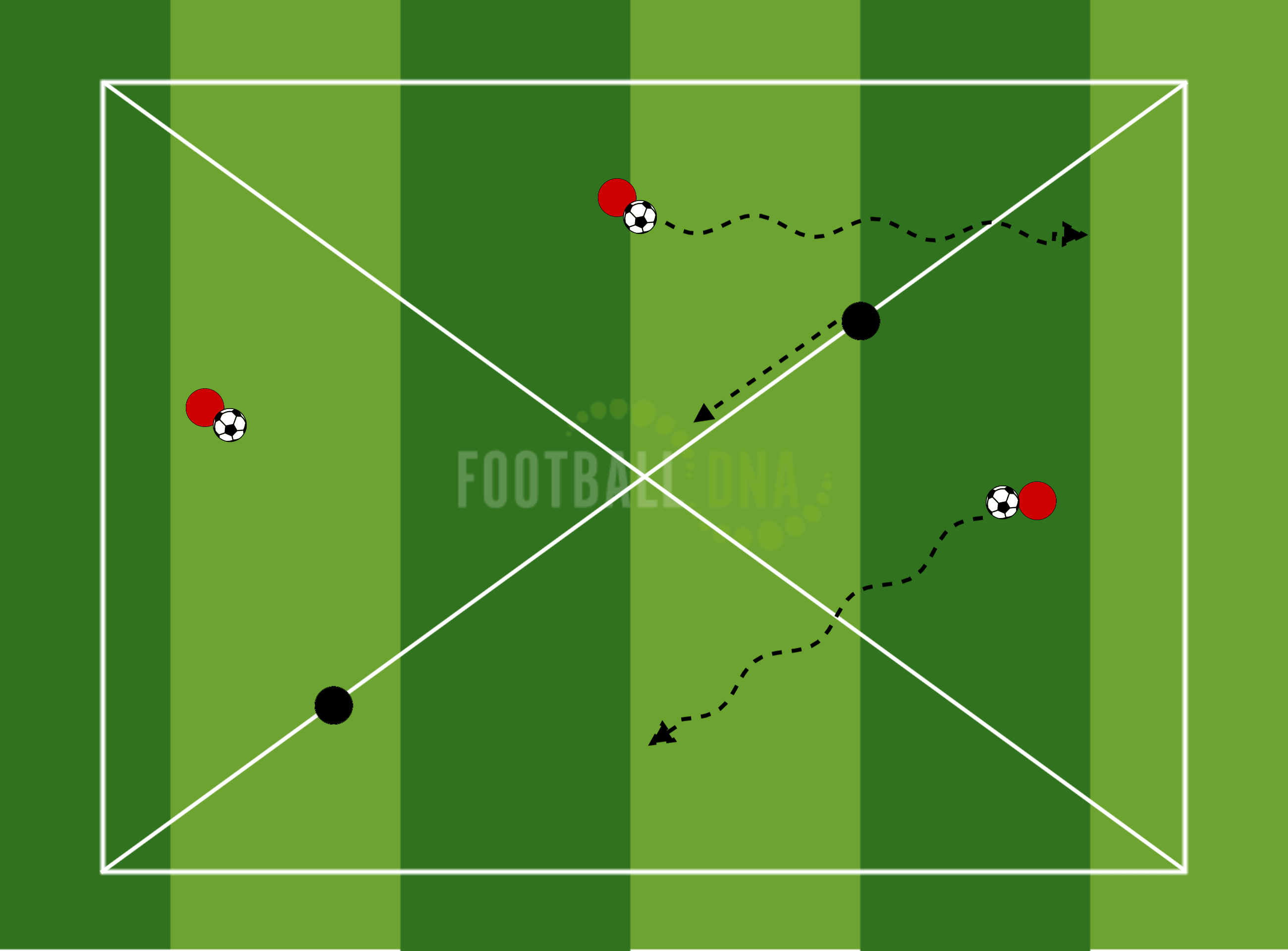 Recreating 1 v 1’s in your training session is something we cannot necessarily offer our players due to the social distancing guidelines provided to us by the Government at present. However, in this blog I am going to offer some ideas on how you can recreate 1v1s in your sessions for your players to allow them to practise some of the skills they’ll need upon a return to training and games without restrictions.

“Before, during and after – the 1v1 sequence”

When considering which 1v1 practice to use when working with your players it’s important to consider how you can link the 1v1s to the game. When looking at a 1v1 skill consider the before, during and after to help you understand the process that the player must go through in order to perform a 1v1 successfully.

Before – before they receive the ball you may want to consider the following: the area of the pitch, the scenario that they’re in, how they’ve moved, where they are in relation to their team mates and opposition and what is the outcome they desire
During – once they’ve got the ball: what is happening around them, what opponent are they are against, where are their team mates etc.
After – the outcome: does it result in a goal attempt or a pass played and what do they do after their 1v1, do they beat another player etc?

In terms of using his to help with your practice design consider the before, during and after and apply constraints/challenges which will help you to put context in place for the player when they’re put in a 1v1 situation. In the practices below, I have highlighted how you may use this process to help you develop the practice further to help you meet the players needs. 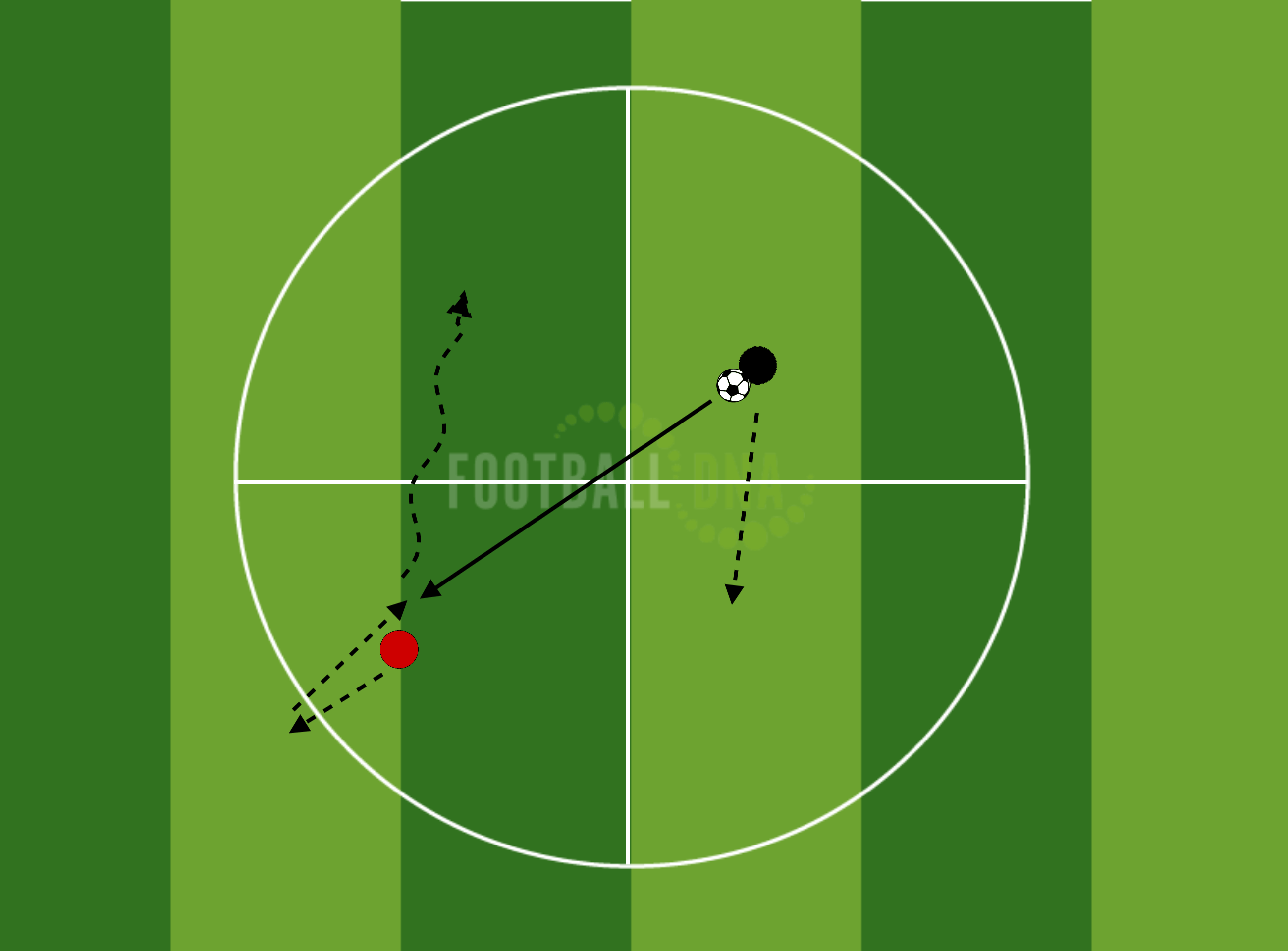 Organisation: Set up a 20 x 20 circle with an attacker and a defender with a ball between two. The attacker players a one, two with the defender and has to try and move into a segment of the circle, the defender then must move into the opposite side of the circle before the attacker. This game can also be played without a ball. 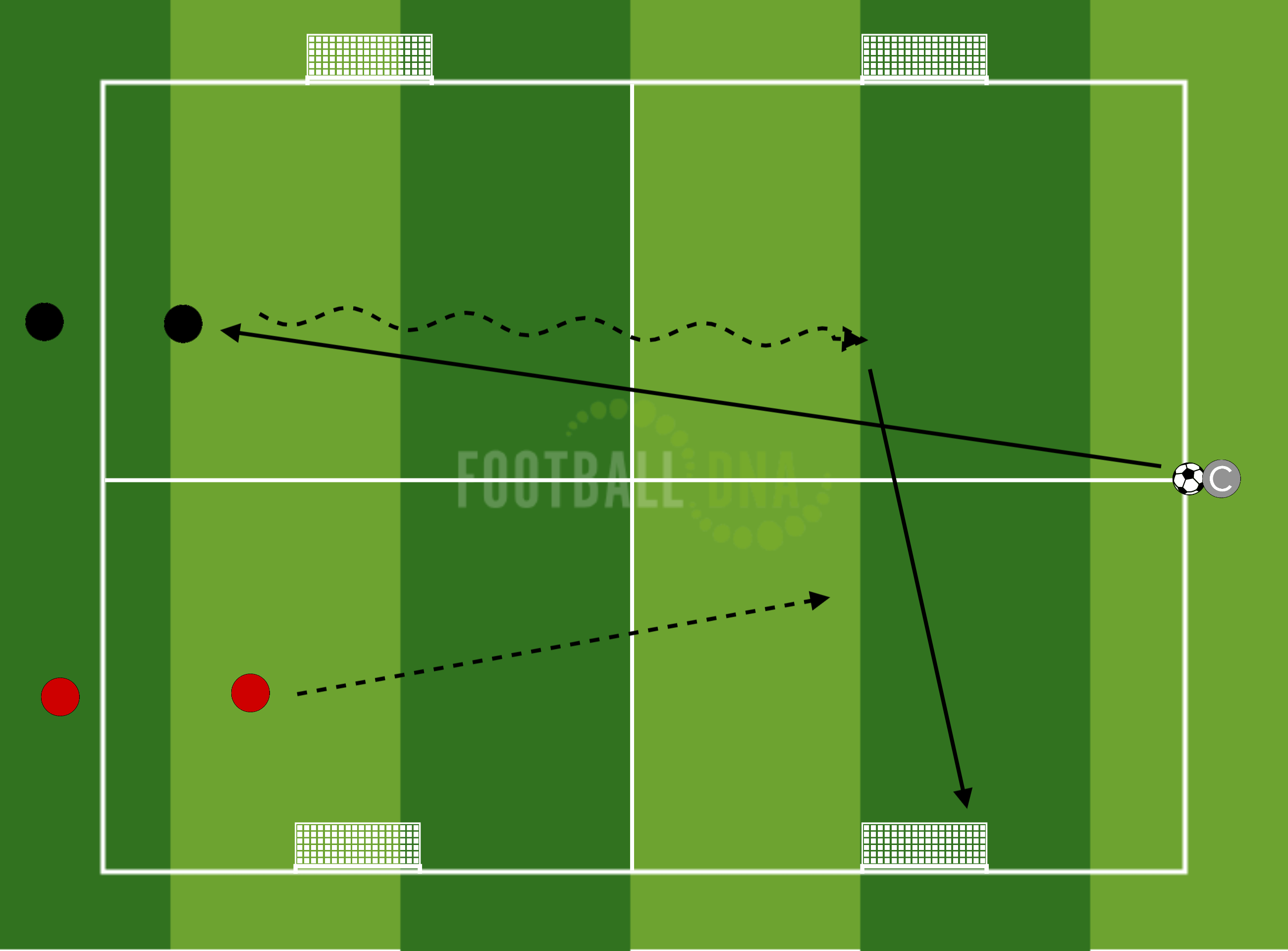 Organisation: Set up a 20 x 20 area and split it into four channels with a goal in each of the channel and a feeder with footballs. The feeder passes into the attacker who must try and and find a way of crossing the ball into one of the targets. The defender’s role whilst staying in their grid must try and stop the attacker from scoring. If they manage to intercept and retain the ball, they can score in the opposite goals as well.

Before – the attackers begin with dribbling the ball and finding a cross and then it’s followed up with them receiving a pass. This will vary their position as well as the defenders position each time. Also, change the sides they attack from too.
During – once with the ball, players get a bonus if they score with a first time shot and/or they must be in a different box to the defender before they can cross
After – once the the attacker has crossed the ball, the defender now receives a pass and have to score

Organisation: Set up a 20 x 20 area and split the area into four diamonds. Each attacker should have a ball each and have to move into a different areas of the diamond and cannot be in the same area as their team mates. The two defenders are without a ball and have to move along the line to try and stop the attackers moving into the area by blocking them, without taking the ball.

Back to Back Box: 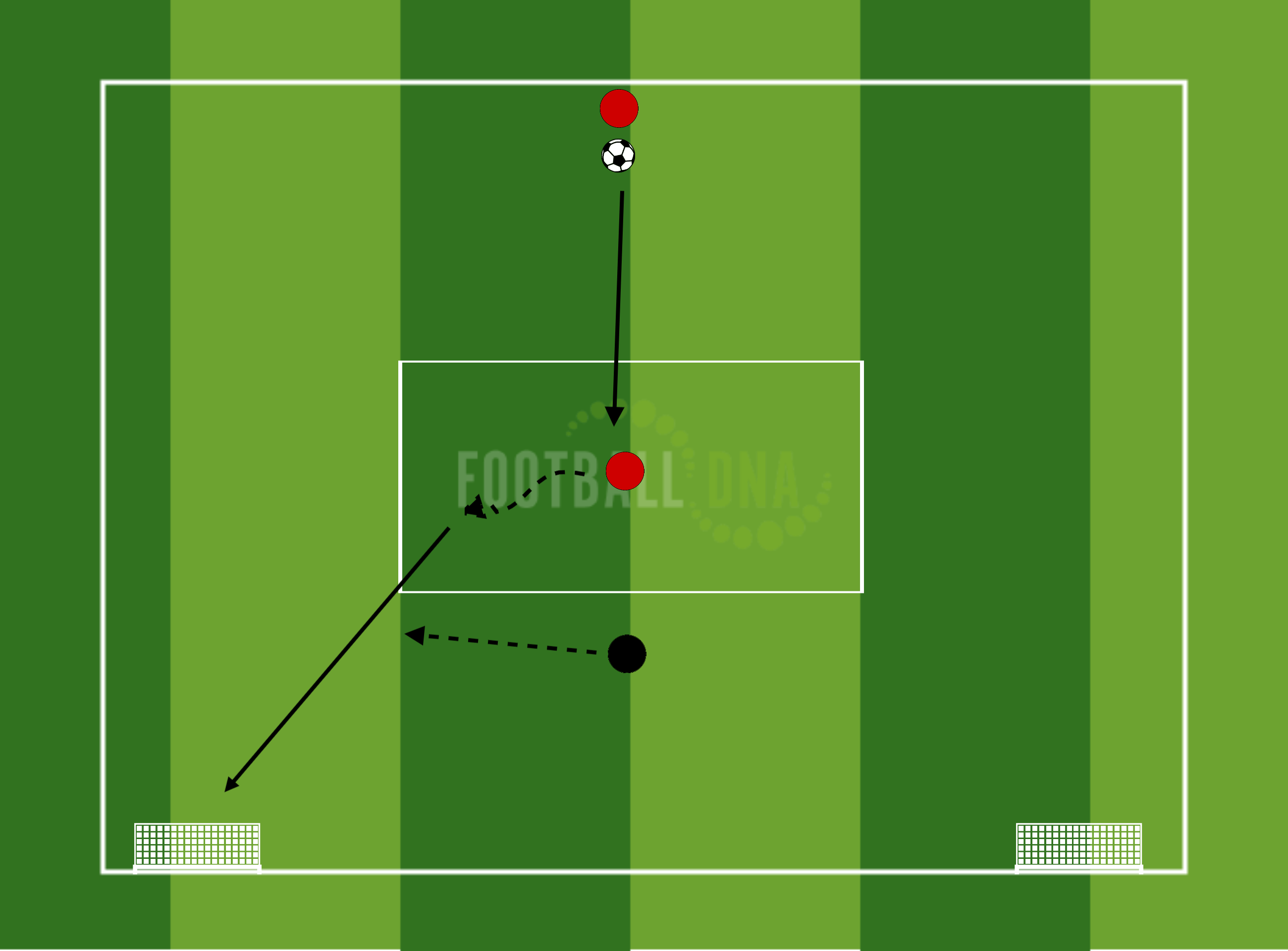 Organisation: Set up an area with a middle box which the attacker is positioned within and a defender that is outside the box with two goals on a line. The feeder passes into the attacker who must try and turn whilst staying inside the box to be able to score. The defender has to try and block the pass/shot that the attacker has.

Before – add a defender that has to try and block the pass into the attacker
During – provide the attacker with an option of passing back or limiting the amount of touches that they have
After – once they’ve played their pass or shot into either goal, they have to receive another ball again 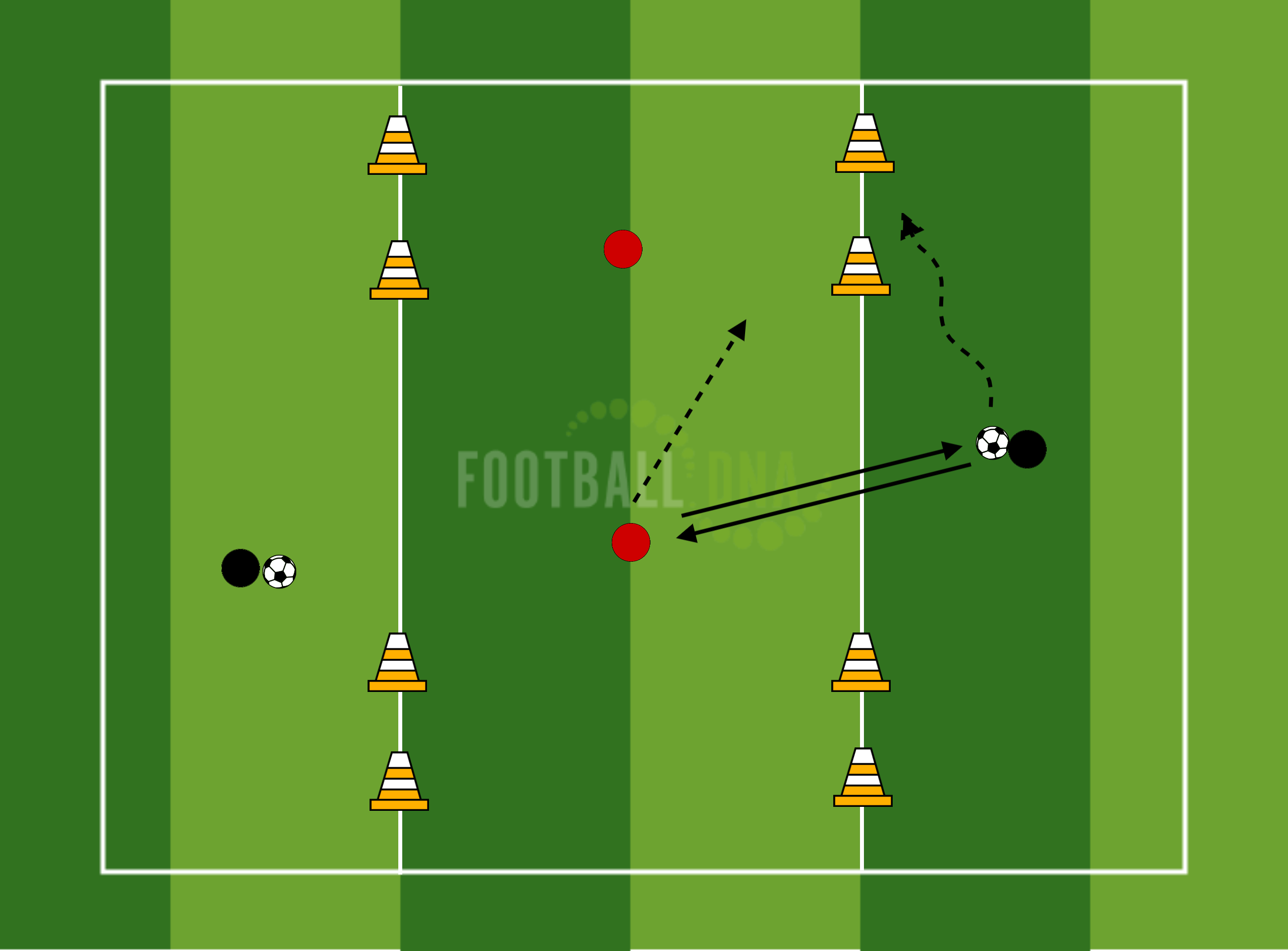 Organisation: Set up an area and split it into three channels with four goals on each channel and an attacker with a ball each on the outside channels. Have two defenders inside the middle channel that have to block the attackers from travelling with the ball and stopping the ball on the line. The attackers cannot score if a defender is block a gate.

Before – the attackers have to receive the ball from outside of the channel before they can score
During – add a time limit on the attackers being able to score
After – instead of players stopping the ball on the line, they have to dribble through the channel and score through one of the opposite gates by passing through

Block the Turn and Shot: 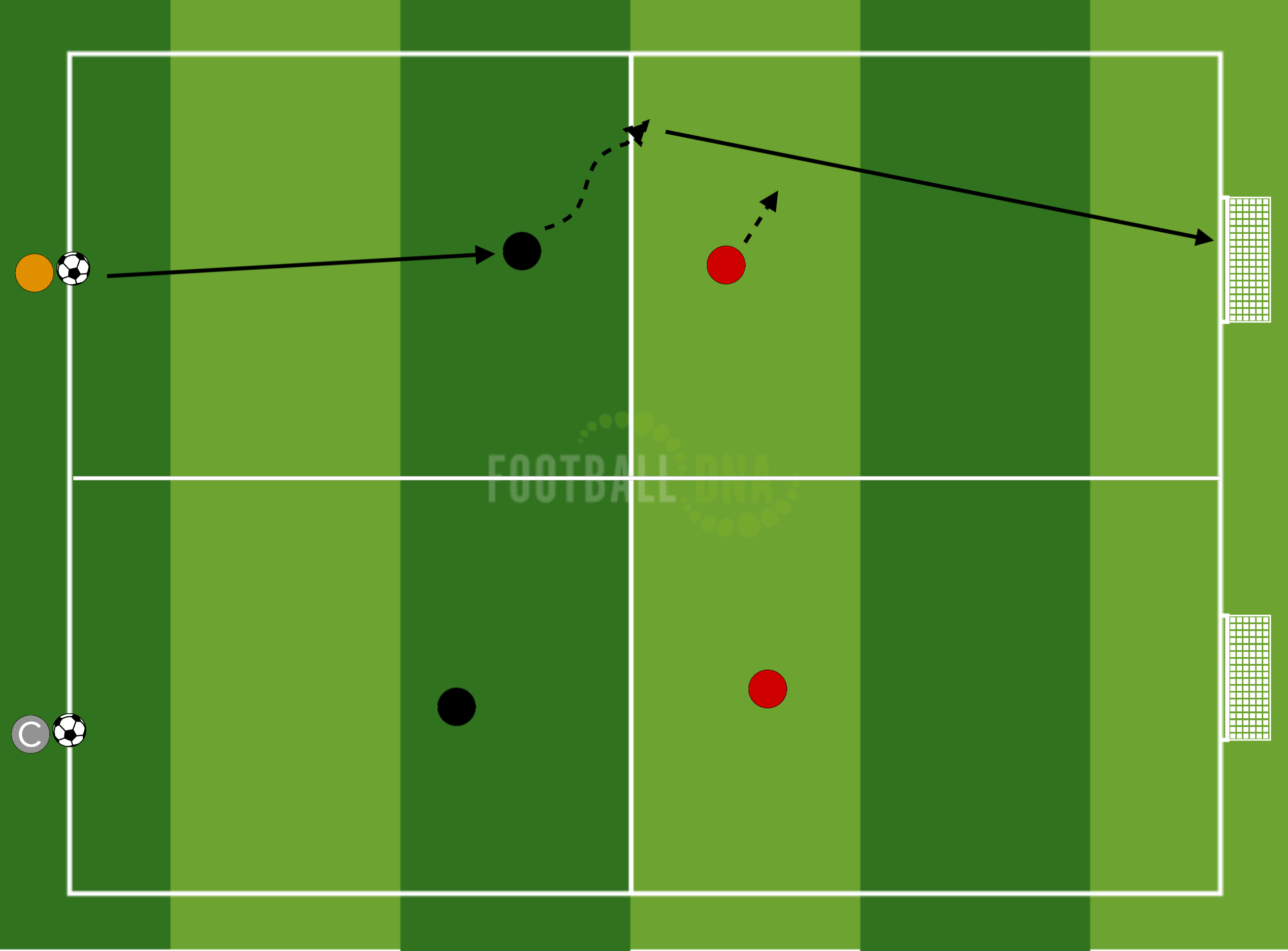 Organisation: Set up a 20 x 20 area and split it into four channels and two goals. Organise a feeder, attacker and defender in each area. The feeder passes the ball into the attacker who has to try and turn and score. The defender must look to block/intercept the shots, if they manage to do this successfully and retain the ball they must then look to pass into the feeder.

Before – the attacker can play passes between them before they decide when to turn and try and score
During – limit the amount of time the attacker has on the ball
After – if they score successfully, they continue to go (winner stays on)