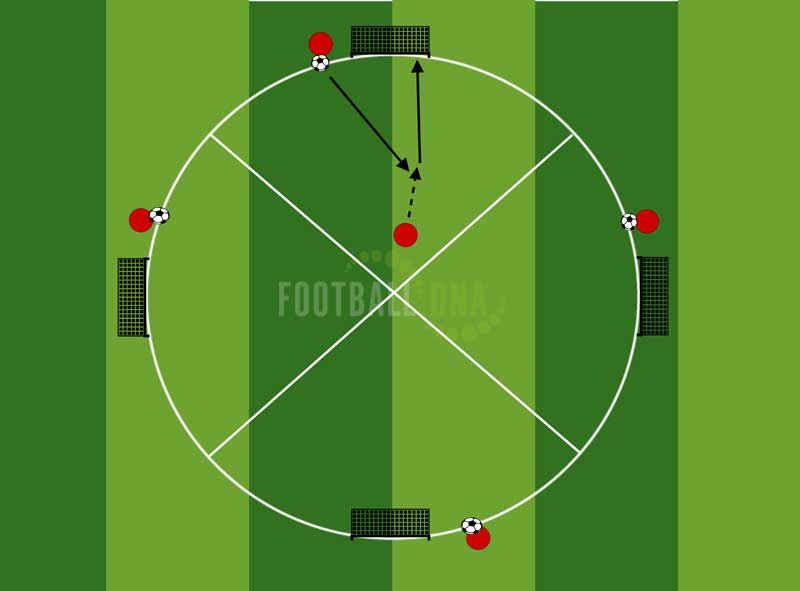 In this blog we will be exploring different ideas on how you can help support your players in practicing finishing whilst maintaining social distancing. All sessions are adaptable to meet your players needs and i’d encourage all coaches to use these as templates to be creative and consider different ways of enabling your players to get opportunities to work on their finishing. Ultimately, children loving scoring goals so why not give them a chance to get lots of opportunities to get that feeling of scoring a goal again after months in lock down. For our other social distancing related drills check out our previous blogs here: footballdna.co.uk/blog

To vary the sessions you can adapt the practices by changing the distance and direction of where the finishing can take place from. By adapting the distance, players will need to adjust the power and type of finish that they need to score. The direction of not only where the pass is being played from for the players to receive and finish but also the direction that they’re travelling with the ball will challenge them to finishing in different ways. Ways you may do this is by moving the feeders and where they’re playing the ball in from as well as add a ‘score zone’ that players have to get inside before they score too.

If you do not have a goalkeeper that can be used to save the players attempts at goal there are other ways of challenging your players to try and score. One suggestion, may be adding targets in the goal that they’re trying to score in. A great way of adding targets in goals is placing bibs into the goals that players have to hit in order to gain more points. These can be used by players reacting to a colour that is called before they receive for them to hit or based on where they’re finishing from they have to hit a certain colour bib inside the goal. Another way of adding targets in the goals is placing cones into the corners of the goal that players have to finish in as well. Traffic can be used in the form of mannequins, poles or cones that will all act as interference for the attackers trying to finish at the goal.

Adjusting the number of touches players can have before they can finish in these practices will help you to adjust the challenge to meet the players needs. With a vast majority of goals scored in no more than one or two touches inside the box, these sessions can be a great way of replicating the challenge for players to get shots away quickly from different directions and distances whilst also dealing with traffic as they aim to hit the target. In addition, you may look to explore challenging your players on different types of finishes that they will need from not only inside the box but also on other areas of the pitch too. These types of finishes may vary from: headers, volleys, half volley, toe poke, outside/inside curl etc. Providing players with the opportunity to practice finishing with either foot with different techniques is a great way of helping them to be an adaptable finisher. 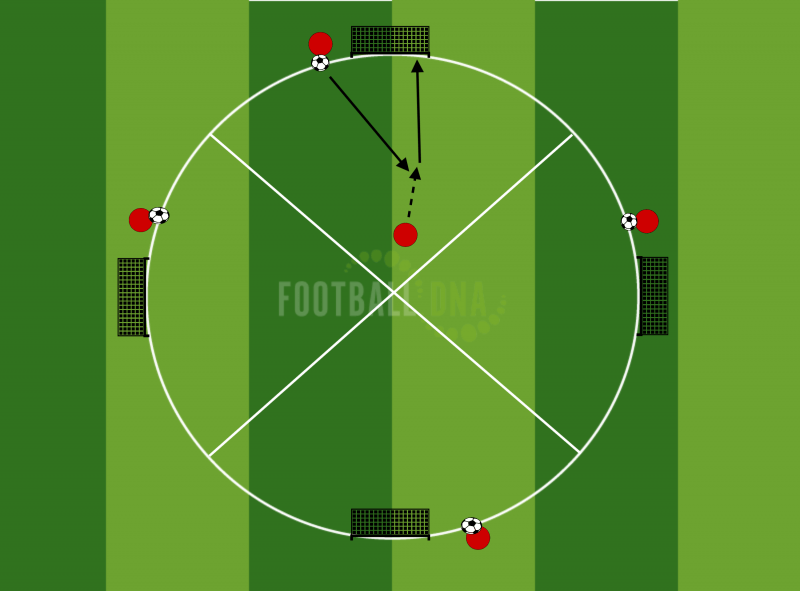 Organisation: Set up a circle and split it into four segments with a goal based on the outside of each section with a target player. The attacker has to move into each section and receive and finish in the goal in front of them. Once the player has had their four shots, they swap roles with another feeder on the outside of the circle.

Distance & Direction: Adjusting where the feeder passes in from will vary where they can finish from, it may be that you challenge target players to travel with their ball around their area before they can pass into the attacker who must finish in the area. Another way of challenging the attacker, is that they cannot score in the area that they have to receive from and they have to finish in one of the three other goals.

Targets & Traffic: The target players have to try and pass and hit the attackers shot. Alternatively, it may be you add some hurdles/ladders/poles the players have to move through/around before they can score.

Touch & Type: The target players can throw the ball in which will mean the attackers have to adjust to finishing aerially, alternatively, you may limit the players to finish in one or two touches as well before they can score. 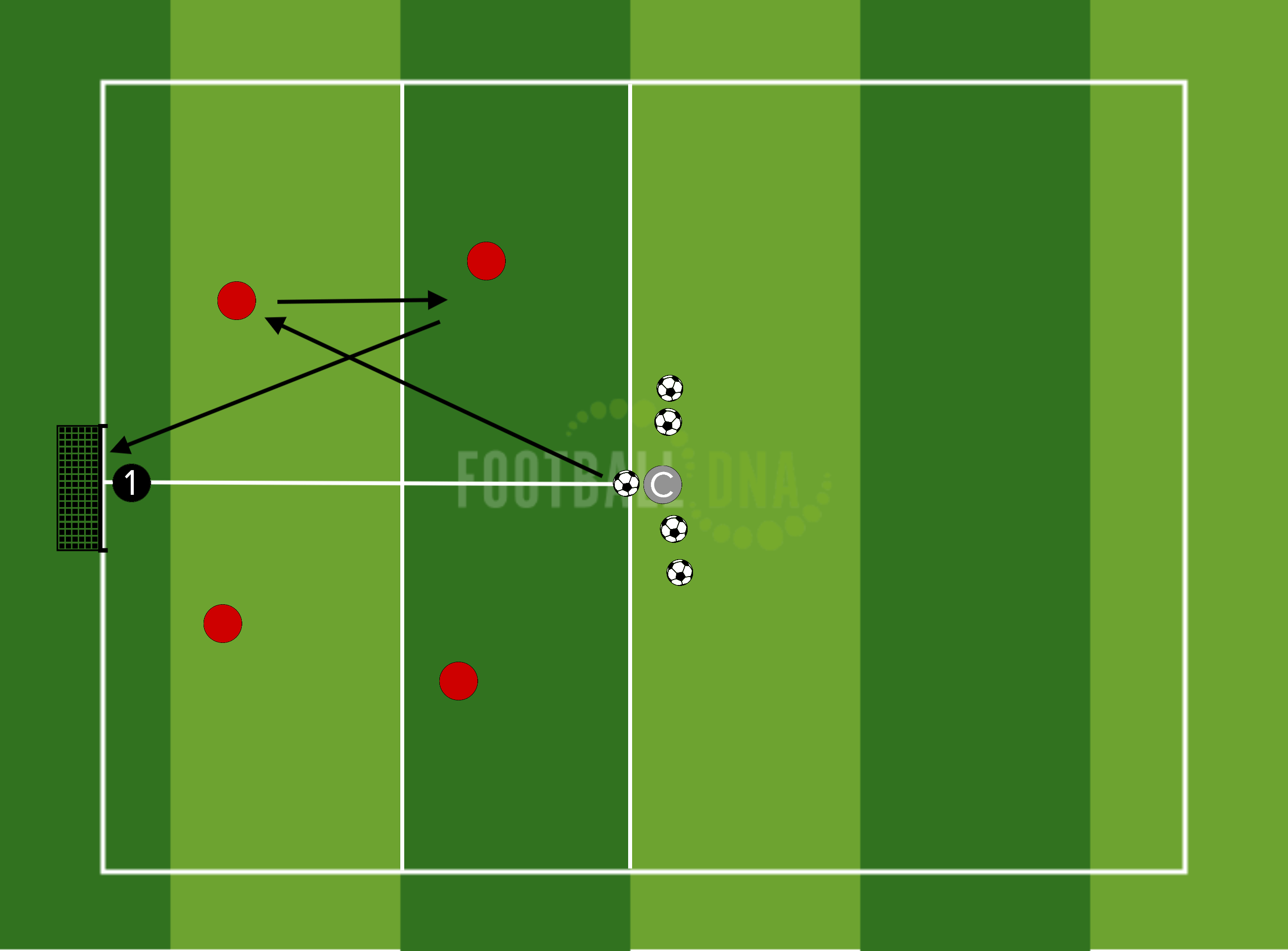 Organisation: Set up a goal and a goalkeeper and four areas in front of the goal. The coach starts on the outside of the area with the footballs, they must pass the ball in and the attackers have to stay and move inside their boxes. As the ball is passed in, players have to combine together before they can get a shot off. Once a shot has taken, the coach then passes a new football in and the players attack again.

Distance & Direction: Adjust how far away the four boxes are set up from the goal, alternatively, have more boxes set up which players can move into (not allowed to be in the same box as any of their team mates). In addition, the coach may vary where they play their pass in from as well.

Targets & Traffic: Once players combine, they have to try and block the shot from the player that decides to shoot. If not, you may look at adding some mannequins or poles in and around the goalkeepers area too.

Touch & Type: Limit how many touches players are allowed in their box or how many touches they can finish from. Also, it may be that you have a number of different types of finishes that players have to score by as a group that they have to achieve together. This will get players to work together to create the right opportunity to finish in that particular way. 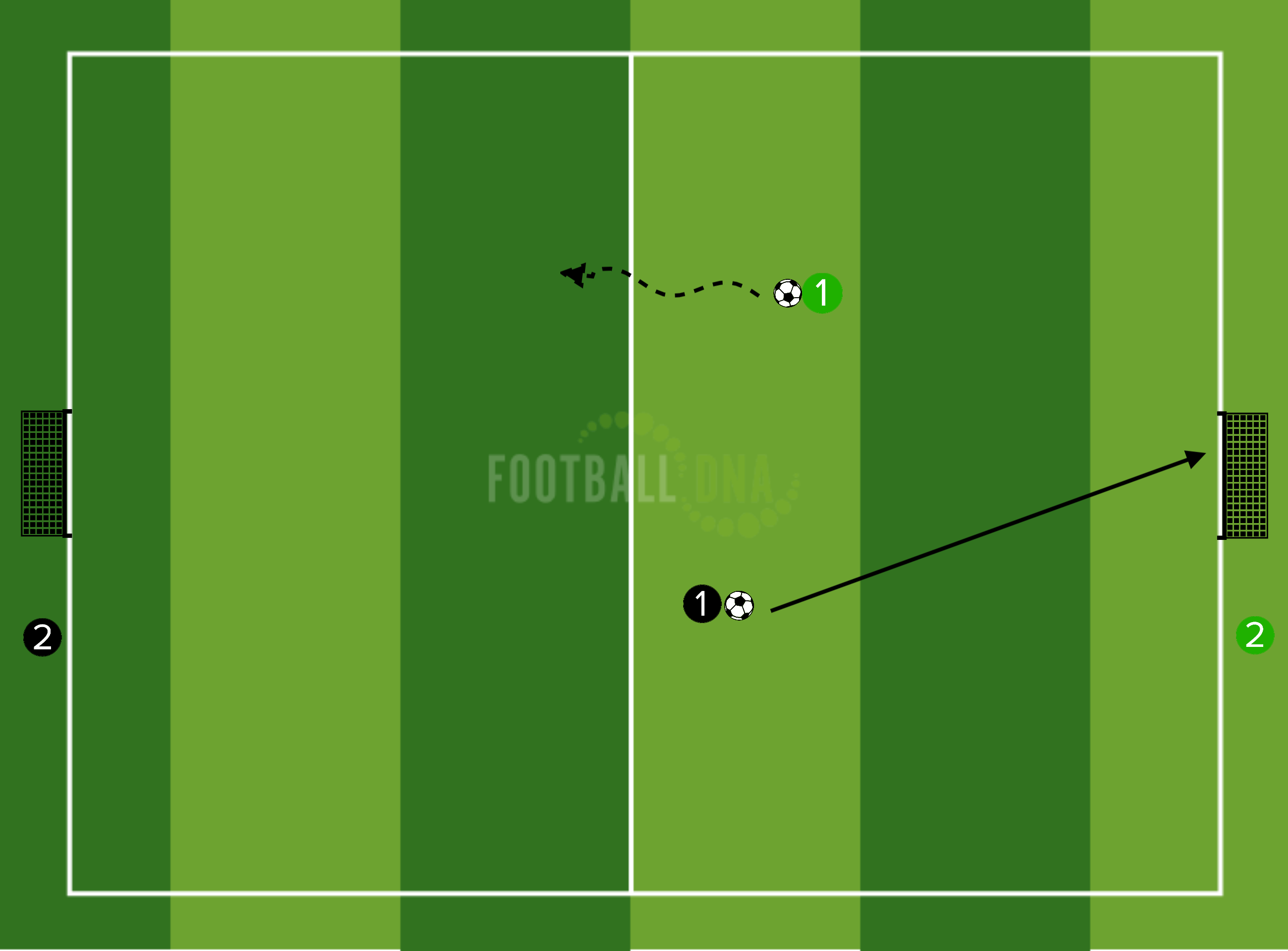 Organisation: Players are split into two halves with a goal at either and also two teams that are set up by either goal with a ball each. When the coach calls out a number, both player from either team have to get into the opposite half before they can score. The first player to score, wins the point. As soon as that round is finished, players return back to their goal with their ball and get ready for the next number to be called.

Distance & Direction: Adjust the size of the pitch by making it shorter, which will allow players to get into the opposite half quicker before they can score. Alternatively, players can score from their own half which will adjust their finishing to be from a longer distance.

Targets & Traffic: The other number that isn’t called, is allowed to become a goalkeeper for their team to try and save their opponents shot. Alternatively, you may wish to add either cones or bibs for players to try and score by hitting them with.

Fox in the Box 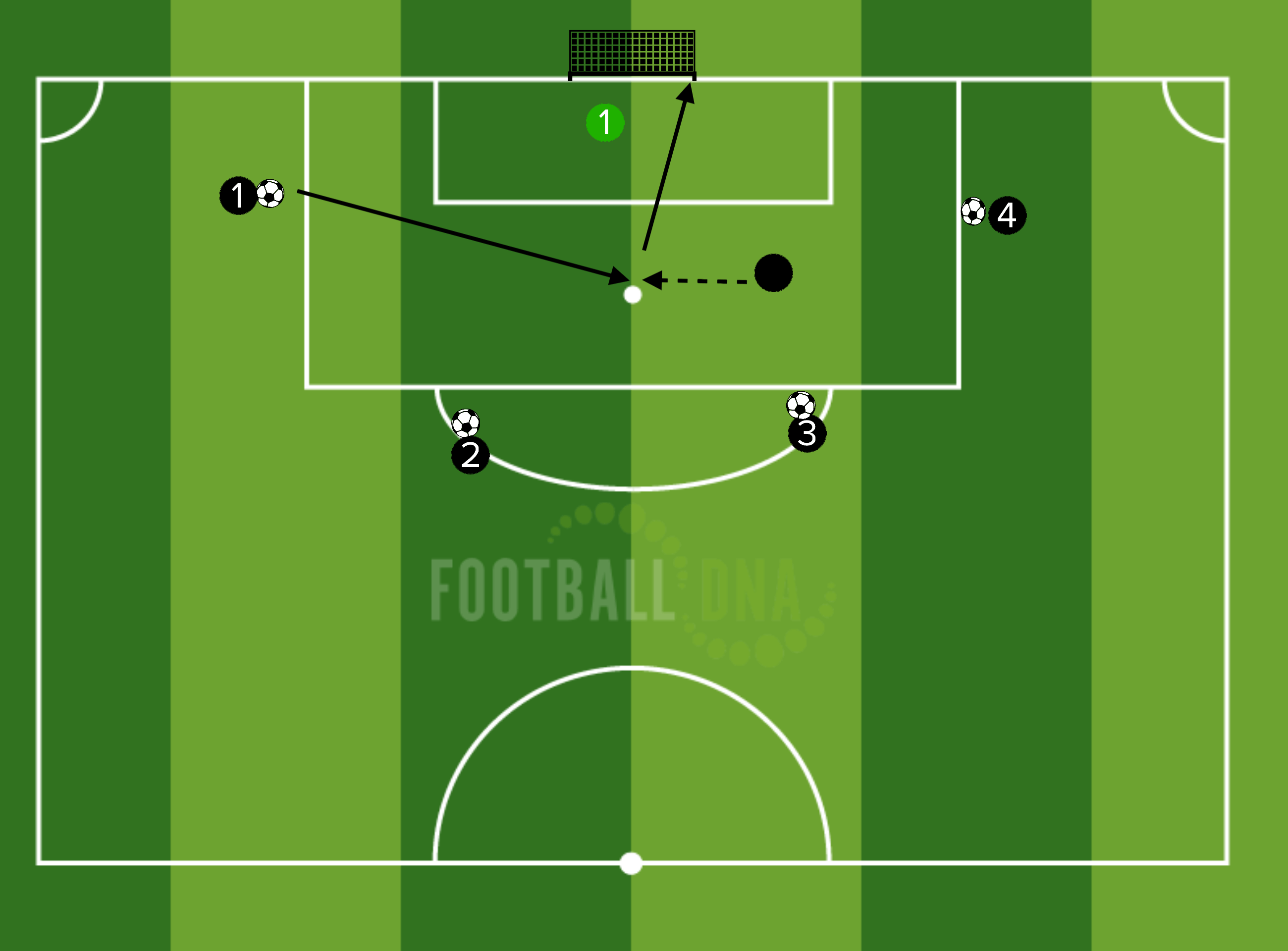 Organisation: Set up a goal with a goal keeper and one player inside the box as well as three/four target players all with a number and a ball each. The coach calls a number and the attacker has to move and receive from that number before they can score, as soon as they get their shot away another number is called before they can score. Rotate the feeders and attackers after each turn.

Distance & Direction: The target players can move and travel with the ball outside the box before they pass the ball, or they are able to pass a ball between them before a number is called for that attacker to receive from before they can score. You may also make the feeders pass in from a distance further away or closer to the goal too.

Targets & Traffic: Once a target player passes the ball in, they are able to recover and get in front of the goal to try and block the shot from the attacker. Alternatively, you may add some targets for the attacker to try and hit with their shots.

Touch & Type: Feeders can also throw the ball in or cross the ball with varying height and speed which will mean the attacker will have to adjust how they move and finish. Also, you may challenge the attacker to finish in different ways based on where the pass is being played from i.e. if you receive it centrally you have to receive with your back to goal to turn and finish. 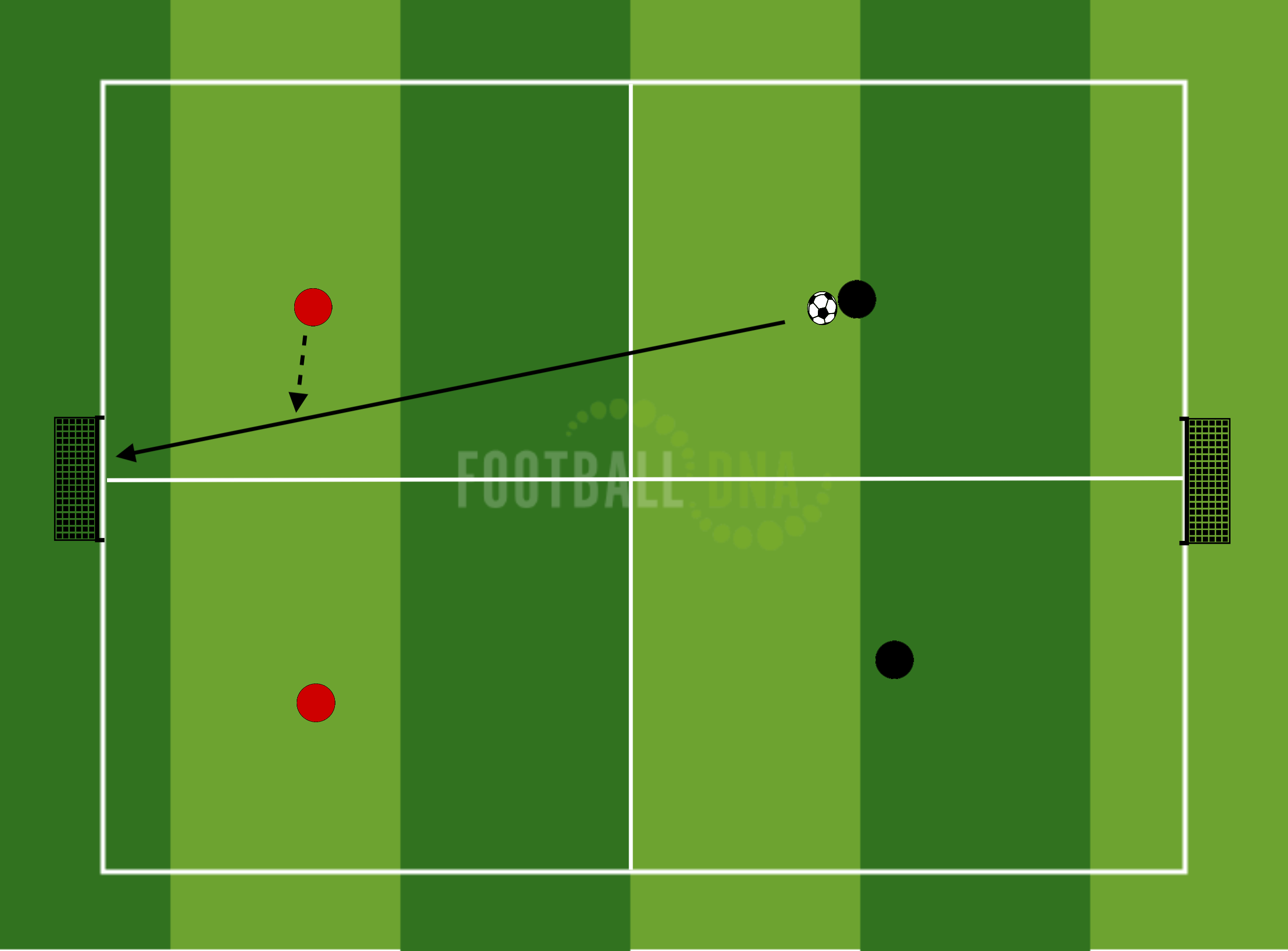 Organisation: Set up a pitch and split the pitch into four areas with two goals and organise two teams with a player in each box. Each player is locked into their area with each team trying to score in the oppositions goal. The opposite team have to try and block their opponents shot at goal, if they are able to control it inside their area or the ball goes out of play/goal is scored they then get the opportunity to work together to score in their opponents goal.

Distance & Direction: Adjust the size of the pitch which will mean that the attackers have to score from either further or closer to the goal.

Targets & Traffic: Add another goal for the attackers to try and score within but also the defenders have to block as well.

Touch & Type: Players are only able to score from a set from their team mate or can only score from certain types of finishes i.e. volley/half volley. 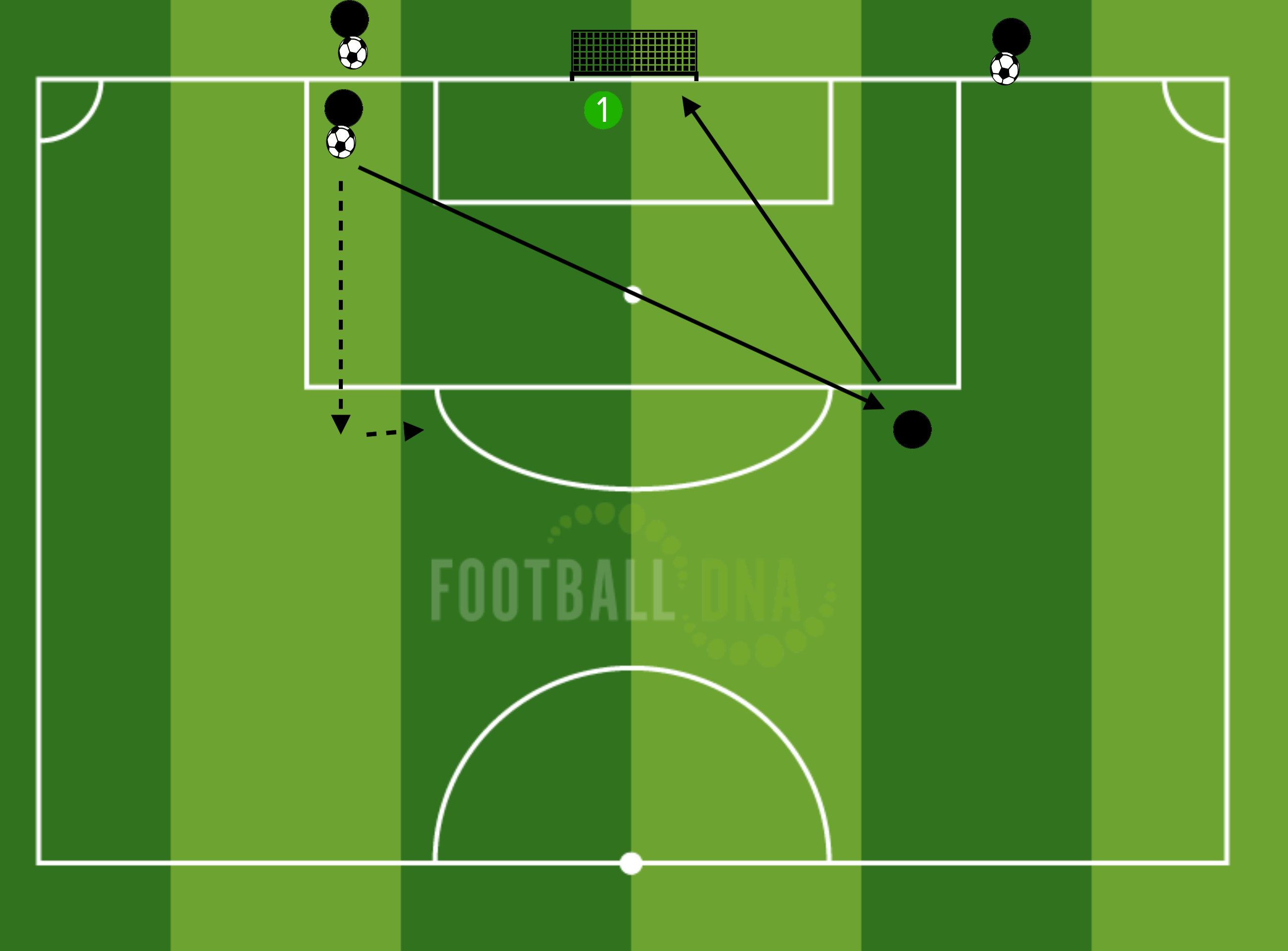 Organisation: Set up on half a pitch and organise a goal with players either side of the goal with a ball each. The players have to run around the outside of the box before receiving from the opposite side and trying to finish. As soon as a player makes a pass, they must move around the area ready for their turn to finish. Once a player has had their shot, they must get their ball and join the opposite line.

Distance & Direction: Add a score zone that players have to get inside before they can score, with target players passing either into the player or into the score zone.

Targets & Traffic: Add cones or bibs, which players have to try and hit for double points.

Touch & Type: Players can throw the ball in rather than pass it along the floor which will challenge players to receive and finish from the air.