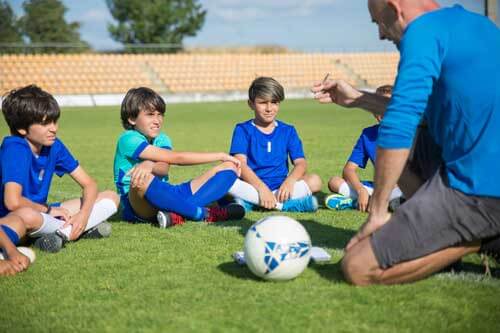 Story-telling is becoming much more prevalent in coaching and development environments, particularly with youth players. Linking a particular moment of learning to a short anecdote or story can have lots of positive transferability to football and other sporting contexts.

An example of story-telling in the most elite of environments was seen with Pep Guardiola and his magnificent Barcelona team just before the Champion League Final against Manchester United in 2009. Guardiola played a 7 minute motivational video to his players charting the story of their season up to that moment, featuring every player in the whole squad. There was no glorification of the high profile stars such as Messi and Iniesta. Every player was highlighted, respected and acknowledge for their contribution and for the greater good of the team. All the highs, the lows, the celebrations and the struggles were seen in the short film. Some of his players were in tears by the end of the video, but the connection between them all became stronger than ever. The player’s recollections of past moments conjured up the same emotions as if they were feeling them for the first time and they went on to win the final 2-0 and become European Champions.

The use of stories – especially those that at first appear to have no direct correlation to sport or indeed football – support and develop a young person’s capacity to remember details more effectively. This is possible through the theme of the story and the emotion evoked in the individual, becoming strongly linked and attached to a moment they are experiencing in real life through visualisation. They are able to recall football information and principles more quickly and strong connections can start to be established between the player and the coach.

Research suggests that the brain cannot actually distinguish between what is imaginary and what is real. Words, pictures and emotions are intrinsically linked in our brains and if we as coaches use words to paint vivid and imaginative pictures, they can impact our players on a deep, emotional level.

Using analogies can be a powerful tool for learning and support the development of a player’s creativity and imagination. Many players feel a connection with a story far more than compared to a coach simply providing instruction or statistics that can often be overwhelming and confusing. Immersing young player’s minds with stories can also develop their social and communication skills by building a common encoded language shared between themselves and the coach.

Creating buzz words or short phrases associated with a story can then be linked to a particular playing principle in a given moment during a match. Here are a few examples of how metaphors can be utilised in a coaching moment on the pitch:

• Counter Attacking – Using the image of Fireworks. When we set out our fireworks, we stack them neatly together, organised, close and structured. This is akin to the picture we see of players getting compact and ready to win the ball back upon a loss of possession. When the fireworks go off, there is excitement as they explode in all different directions at speed. This is our players winning the ball back and quickly attacking the opponent’s goal with speed and fast movement on and off the ball.

• Switching Play – Using the image of being stuck in traffic. If we are stuck in traffic and unable to progress forwards, what do you have to do? On my way to work, when the M25 is blocked, I have to alter my plan and choose an alternative route, maybe the A13. This can be used when players exploit an opponent’s weak side by switching play. Their progress forwards may be blocked unless they change the point of attack and switch the ball quickly to the opposite side of the pitch.

• Pressing – Using the image of a sheepdog. What does a sheepdog do? It herds sheep into a pen and makes their movements predictable. Liken this to a player initiating a team press and blocking off passing options in order to make their decision predictable for the team and increase their chances of winning back possession.

Stories, anecdotes and metaphors are fantastic tools to encourage learning and instant recall in our young players. Try and create some stories of your own linked to particular moments in the game, or better still, ask your players for their ideas!